I blame it on benadryl. I’d been bugged by a few things that might have kept me from sleeping well, so I took a couple of benadryl before going to bed. And maybe it did help me to sleep, but curiously, it also seemed to put the things that were bugging me into suspended animation; I woke up feeling like I did before I went to sleep. Well, not exactly, because I really didn’t feel like I’d woken up. Benadryl does that to me, which is why I generally stay away from it.

I normally need about 6.5 hours of sleep, but have managed to have some really strong rides with as few as 3 or 4. Those nights where something keeps you up, and you think, no way can I get up and ride in a few hours. But you do anyway, and it goes well. Or… you can take the two 25mg benadryl and sleep despite whatever’s bugging you, but not feel like you really slept and/or not feel like you’re awake when you get up.

So yes, I’ll blame the fact that I couldn’t keep up with Kevin (former kid) and Kevin (former pilot) on benadryl. Making things worse? Just before we get to the park entrance, we hear something behind, almost a literal whoosh, and JeffZ goes shooting by! I was, at that point, still hanging on (just barely) but that was it. I couldn’t hold the wheels of the two Kevin’s and they gradually rode on away, finishing a couple minutes ahead of me. It’s not like I was slow as a dog; other days, either Kevin might be riding at a much slower pace than I rode today.

Once up on Skyline, it was a matter of sucking wheels to stay alive. There were a couple time I had to remind myself how much more difficult it is to lose a wheel and ride on your own than stay on it. 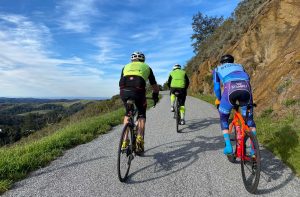 Descending 84 to West Old LaHonda was pretty fast, with JeffZ riding at the front and just a hint of a tailwind. West Old LaHonda was its usual beautiful self, at least once you get past the hairpin at the end of the valley. Even a turkey watching us from the hillside.

Hopefully, come Thursday’s ride, it will be someone else’s turn to be the weakest link.