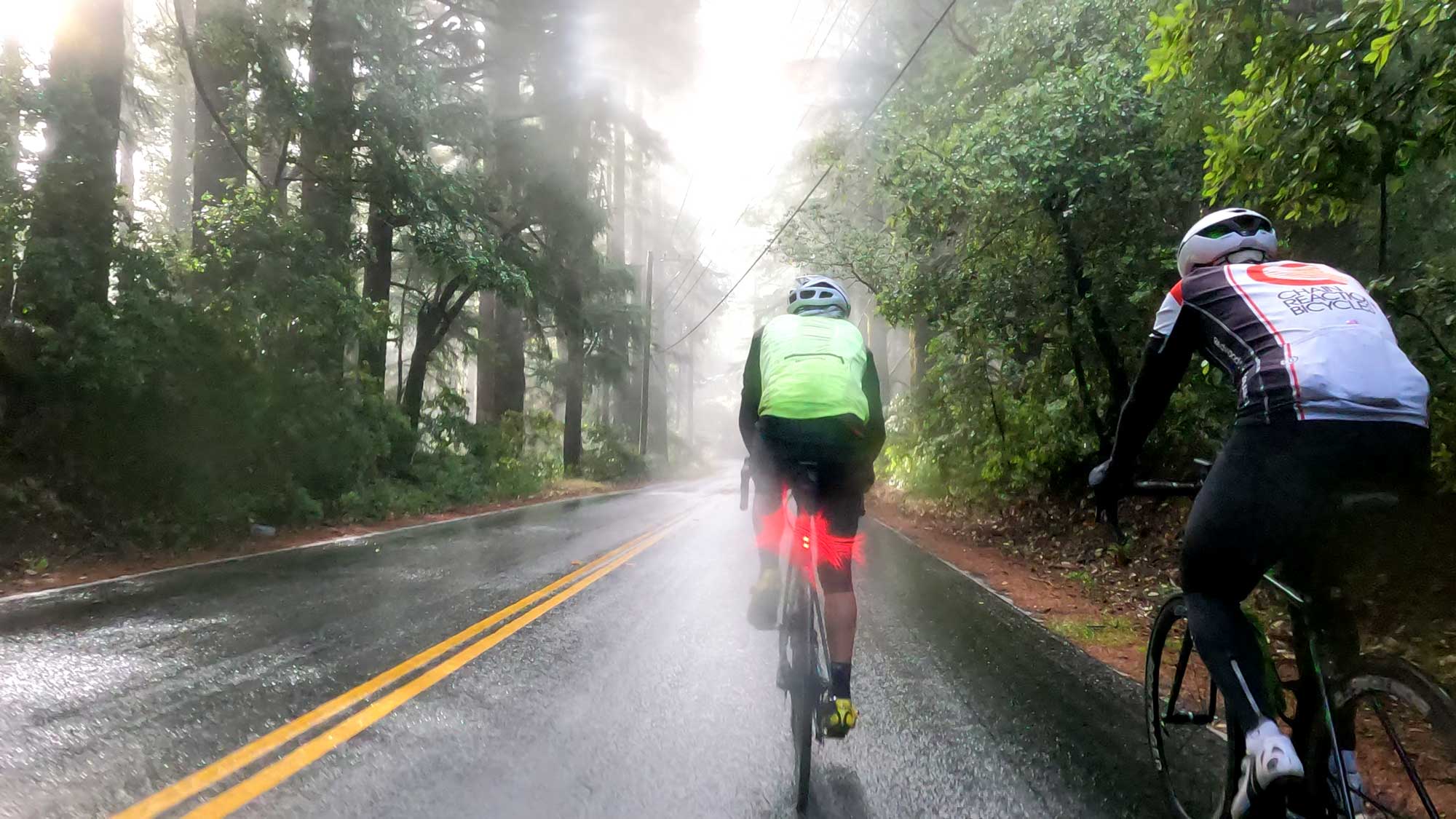 As we’re watching the clock run down on time left to get ready for our annual trip to the Tour de France, we have to wonder… is riding in cold muck preparing us for what’s coming? Hope not! But it’s not as if we haven’t had some epic weather days on the bike. Two really stand out; first, going to bed in Lourdes to a raging thunderstorm, the morning before riding out to the Tourmalet stage. Fortunately no thunderstorms while riding, but we did get a fair amount of rain. But nothing compared to the torrential rains we had descending from the Galibier to Bourg d’Oisans (base of Alpe d’Huez), half an hour of insanity, could hardly see the road, just following a ton of bikes ahead of you and hoping other bikes didn’t run into you. I pretty much destroyed my front wheel, grinding through the rim. Later that day, someone responded to my Strava post that, just 10 minutes behind us, two landslides cut off 400 cyclists from the rest of the world. They were stuck for two days, staying in churches and schools, no clothes or supplies. Dodged a close one!

Of course, last year I broke two ribs sliding out in the rain (yeah, while carrying a pizza, I know…), my most serious incident to date. Maybe 10 years ago I was climbing near Foix and a rider descending lost control and clipped me, putting us both to the ground. I didn’t think much of it when it happened, but looking back, and how I rode the next 5 or so days, it’s possible I might have done more damage to myself than I thought.

Thankfully, I’ve not practiced crashing (away from France) for several years.

So how did this morning’s ride go? Well, pretty slow. Kevin and Kevin showed up, with Kevin (ex-pilot Kevin that is) finally slowing down a bit as he’s gotten older. I’m ok with that. Kevin (younger) rode on ahead, and I’m ok with that, too. A bit annoying that we had to go long sleeve and leg warmers again; it’s only been three weeks, I think, that we’ve been able to ride without them.

Am I in shape for France? I figure I’ll ride myself into shape while there. Yeah, right. We’ll be starting out pretty hard the day after we get there, staying in Grenoble for the Alps stages. Then we take a few trains from Grenoble to Lourdes, to see a couple stages in the Pyrenees, before flying home. We’ll be missing both the final time trial and Paris, but staffing at the shop is very tight and missing two Saturdays didn’t seem like a good idea. Also, it wasn’t practical to spend a lot of time in the Pyrenees because there are really just two stages there.

Flying won’t be nearly as easy as last year; planes and airports were pretty empty, with upgrades easy to come by. This year, we’ll be in economy plus, no chance to upgrade even to premium economy, and the flights were expensive! We did get smarter and won’t be connecting within the US like we did last year, flying SFO-Newark-Paris, getting delayed in Newark 4 hours and missing the only possible train to Lourdes. Had to stay overnight in Paris then fly to Toulouse, via Munich I think, where Lufthansa lost some of our luggage. Not great memories. Hope for better ones this year!

People can argue all day about laws that Trump may or may not have been broken. At some point we have to recognize clarity of purpose is all that matters. “Mags” refers to devices (metal detectors) used to detect weapons (knives and guns) during the insurrection.