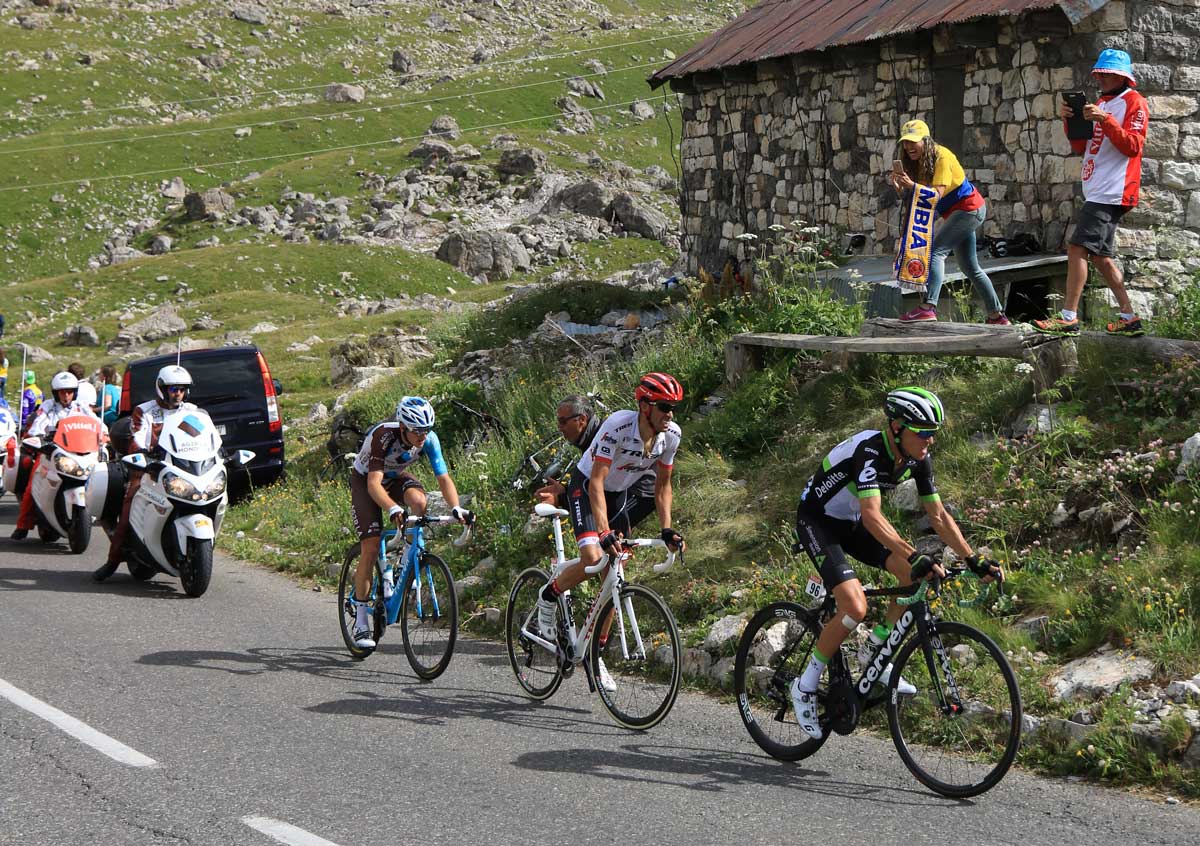 Did I forget to tell Larry, who’s with me on this trip to the Tour de France, that the Galibier was, well, big? No, didn’t think so. But I don’t think it really set in until he got his chance to sink his teeth into it this morning. It’s a beast!

The original plan was to take a ridiculously-early-morning train from Grenoble to a station near the base of the Galibier, but that would have required a 5:45am alarm. Somehow that just didn’t seem reasonable. So I worked things around a bit and figured we could, in fact, drive there if we parked a few miles from the base of the climb, and woke up at the much-more-reasonable hour of 7am.

This should have worked out fine, giving us enough time to make it to the top before the roads were shut down, but Larry’s from Houston, and they don’t have mountains in houston (especially so after they took down all the tall oil derricks you see in old movies and pictures). Of course, a hill is nothing but a flat road tilted up on its side, right? But riding over 20 miles on a road tilted on its side can beat down just about anyone, so we didn’t get up there quite as fast as planned. Not a huge deal though; we found a nice spot about 4k from the top. What I didn’t expect was Larry suggesting we finish the climb after the last of the race had gone through. Kind of dumb on my part; if I were him, and I’d traveled all this way to France to ride my bike, and I’m just a few miles from the top of one of the iconic climbs in the world, wouldn’t I want to make it to the top? Well duh!

4 kilometers doesn’t sound like much. Less than 3 miles. But it’s a pretty tough 3 miles, and at 8000ft+, the thin air has an effect too. But it felt good being up there, first time for him, second for me (kinda 3rd but not quite; first time was the 103 miles Glandon/Galibier loop I did with Kevin in 2011, second time was a few years later, but stopping about 300 meters shy of the top because they wouldn’t let us further up, and besides, that was from the easy side while the 1st and 3rd times were from the much-nastier northern approach).

More on this day soon, but have a 6:30 alarm tomorrow morning for the Izoard stage, which, logistically, is a bear. Not even sure we’ll be let up the hill at all. Hope so! –MikeJ

The “traditional” TdF trip of the past 8 years (2007-2016) has included my son. Not this time. He’s got some school obligations to take care of, and it’s not likely the bike shop can spare us both. That “traditional” trip has typically been 11 days, leaving on a Thursday and arriving home two Mondays later. So for example, last year Kevin and I left on July 6th (ok, that was a Wednesday) and returned on Monday, July 18th. We actually squeezed in an extra day last year. Not this trip. just 8 days total, leaving on Sunday, July 16th, and returning Monday, July 24th. Fast & furious!

Originally thought about flying into and out of Lyon, keeping things super-simple, and possibly avoiding Paris altogether. That didn’t work out; air fare was cheap out of CDG (Paris) at $1130, vs $1700+ out of Lyon. Too bad; Lyon airport has a one-hour direct connection to Grenoble, via TGV. So here’s how it plays out-

Sunday, July 16th, fly from SFO to Paris (CDG) arriving Monday about 9:30am. Yes, you lose a whole day flying east. Hate that! Catch a train from the airport at 11:57am that goes straight to Lyon (about 2.5 hours) than a regional train from Lyon to Grenoble (about an hour). Arrive Grenoble about 4pm.

Walk a VERY short distance to the fantastic Appartements Residilaverde Gare. 85 euros (about $90)/night for a very large apartment just 100 meters from the train station. Incredibly, not just a full kitchen (not that I’d be cooking though) but also a washer/dryer combo. No need to bring more than 3 days worth of clothes. How great is that? Monday evening build the Bike Friday, eat dinner, SLEEP!

Tuesday, July 18th,  is a “local riding” day. No option to catch the ‘Tour, which is too far away to be practical. There is some AWESOME local riding in the Grenoble area though.

Wednesday, July 19th, take a train at 6:37am (but who knows what time it would actually feel like) to Saint Michel de Maurienne, arriving 8:37am. This puts you right at the base of the Galibier, on the long side… the side the ‘Tour will be climbing about 6 hours later! Stage details here. Climb to the top, see the stage on one of its most-iconic mountains, then head back down the way I came up, catching the 7:42pm train that arrives back in Grenoble at 9:27pm. Arriving “home” this late might require having dinner at the apartment rather than eating out, although it’s quite likely there would be enough time prior to the train’s departure to catch dinner in Maurienne.

Thursday, July 20th. This is where it gets interesting. For me, the most-important stage is the one going over the Izoard. Doing this without a rental car is tough. The best plan I can come up with is a two-day bike “tour” where I’d take the 8:10am train to Montdauphin, at the base of the Izoard, and ride to the summit to see the race. The route is shown here. Trouble is, there is no train available to get me back to Grenoble afterward! So, if it’s possible, I’d carry an extra day’s worth of clothing and, after seeing the stage, ride down the “other” side of the Izoard and spend the night in Briancon. This leads to-

Friday, July 21st. Leave Briancon and ride back to Grenoble via the Col du Lauteret. Route shown here. 72 miles, 7200ft of climbing. This would be a tough ride without carrying overnight stuff. With it… could be a long haul! The Tour de France would be doing a pretty flat ride that day, so not missing much there.  After dinner, time to put the Bike Friday back into its suitcase; it won’t be needed anymore.

Alternative- Thursday morning, rent a car and drive to Briancon. Get the bike out and then ride south from Briancon to the base of the Izoard, up & over the pass and back to Briancon. Drive back to Grenoble.  This is workable only if I’m going with someone else; I’m not a fan of long solo drives in a car.

Saturday, July 22nd. Take the 9:05am direct TGV train to Marseille to watch the time trial. Arrive 11:16. See Time Trial, return on 6:14pm train, transfer in Lyon, arriving back in Grenoble at 9:42pm. Since these are TGV, it’s likely not practical to bring the Bike Friday, which would have made it easy to ride around the course to get pictures.

Monday morning, already at the airport so the 11:15am flight home doesn’t require an early wake-up!