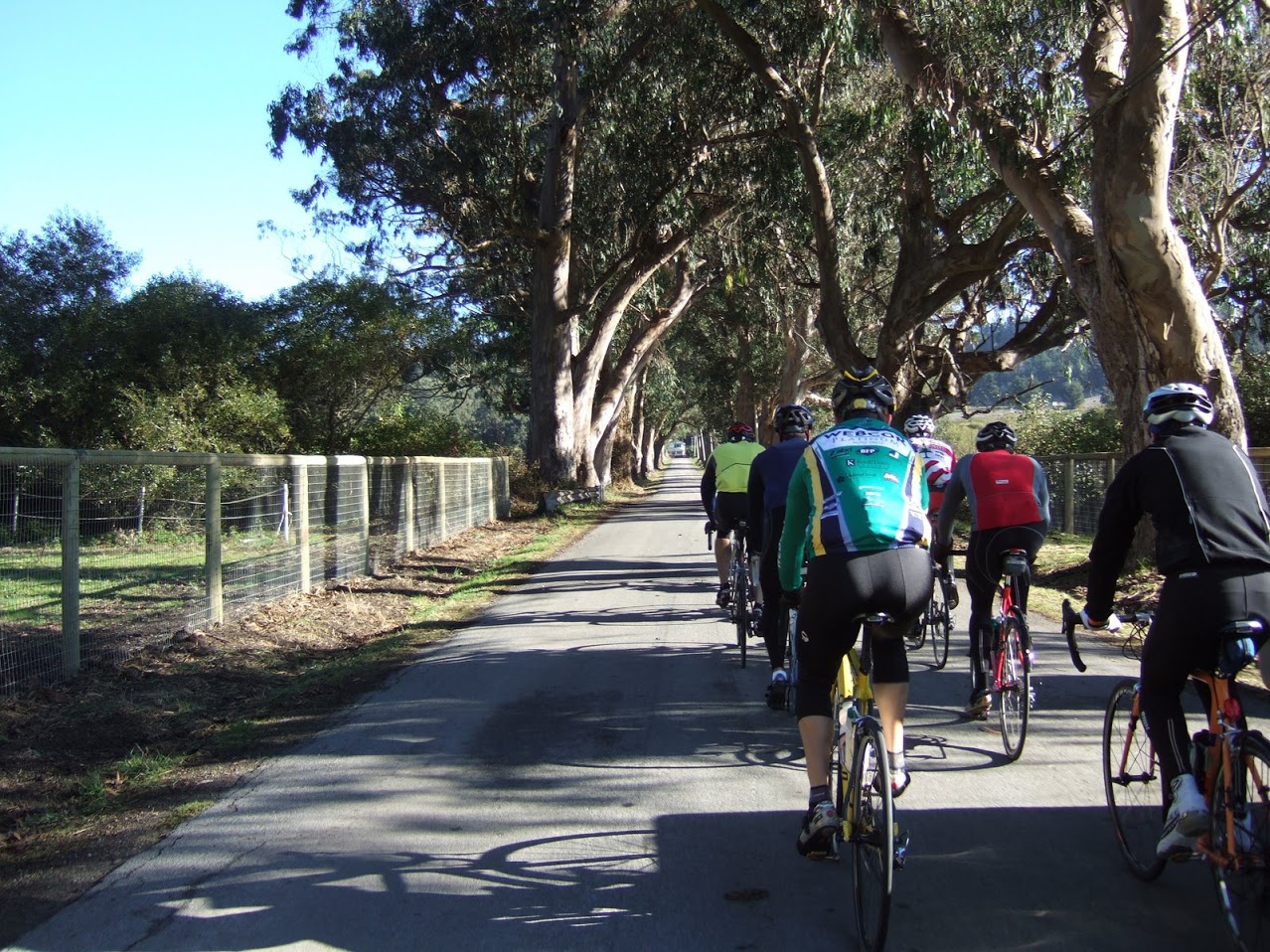 It’s that time of the year again, that time when the weather in Northern California remains so nice you almost feel guilty about it, almost as guilty as you’ll feel about over-stuffing yourself at Thanksgiving Dinner. Except that you won’t feel guilty because you went on a great bike ride in the morning and got back in time to help prepare the dinner!

Our usual Tuesday/Thursday-morning bike ride leaves from Olive Hill & Canada Road at 7:45am. Since Thanksgiving’s a Thursday, that’s where we’ll be, and that’s when we’ll be there. 7:45am. We’ll be doing the “Coastal Classic”, about 55 miles round trip with about 5500 feet of climbing. Up Old LaHonda, down 84, detour past the “secret” Duck Pond in LaHonda, over Haskins Grade to Pescadero. We’ve confirmed the regular Pescadero Bakery will be closed but believe it or not there’s food & cokes at the old gas station at the corner of Pescadero & Stage Road. We’ll quickly refuel and head north on Stage Road, take Tunitas Creek up to Skyline, then down Kings back into Woodside.

This is a challenging ride; you need to be capable of riding up Old LaHonda at a 26 minute (or better) pace, and keep that pace up for two more significant climbs (Haskins and Tunitas). We’ll regroup at the top of Old LaHonda, possibly at the top of Haskins, definitely in Pescadero and one last time at the top of Stage Road. Once we hit Tunitas, you’re on your own. You will be back at the start between 12 & 1pm.

Could be just a few of us, could be more. Past rides have had anywhere from 3 to 20. This will be a social, not training ride. No sag/support, water available in Pescadero, possibly food too but be prepared just in case. No rain, temps in the low-60s on the coast, but expect upper-40s on the way there.

You’ll be back between 12-1pm so you can help cook, watch the games, drink beer, whatever. The day is yours!  –Mike Jacoubowsky

View Larger Map
An odd ride, eh? Starts and ends in different places. Ah, the things you can pull off if you’re not tied down to a car!

We’ve got some decent transit in the bay area, so why not use it? Not really fast transit; you have to go to France for that. But you can put together a good East Bay ride by riding to your nearest CalTrain, connect to BART at the Millbrae Station, and arrive in Walnut Creek ready to go! We left the house at 8:17am, just enough time to pick up coffee and breakfast at Starbucks before catching the 8:41am train, which connects to the 9:21am BART, which arrives in Walnut Creek at 10:30am. Could you drive there faster? Sure. About 1 hour 10 minutes; 1 hour 30 including the stop for Starbucks, so maybe 45 minutes faster by car. But then you’ve got a car that you have to get back to, limiting your riding choices. If you do an out (by transit) and back (by bike), you can effectively increase your radius from 50 miles to 75 or more! Which is obviously what we did.

It was pretty nice out there; close to hot, but not quite. The climb up Mt. Diablo was between 73 & 80 degrees and was surprisingly easy. We stopped once on the way up to help a guy with a flat (new bike and he wasn’t too familiar with it, plus he was using the tubeless road clinchers, something I don’t think is quite ready for prime time). Tried to save a snake but unfortunately got to watch a car drive right over it. Lots of road stain from previously run-over snakes & tarantulas, much more than I’ve seen elsewhere. The road surface is fantastic, far better than Mt. Hamilton.

Interesting thing about the top of Mt. Diablo today. It was just exactly the right temperature to make you a bit too comfortable. You felt like you could sit down and read a book for a couple hours, chat with people, whatever. Seemed like a nice place to hang out. That’s not usually what goes on on a bike ride!

The ride back down was uneventful but slow (slow mostly because the park has radar-enforced speed limits of 15 to 25 miles per hour), after which came an unexciting cruise through Blackhawk and the backside of Dublin. I’d been concerned there might not be many places to eat on this ride, and maybe 15 years ago that would have been true, but things are pretty built up now and it was no problem finding a Subway near Camino Tassajara & Blackhawk Road.

Palomares Canyon was as challenging as ever, and also the finale as far as anything really fun on the ride. After that it was city roads with traffic through Fremont, which was actually a whole lot better than what followed- the Dumbarton Bridge lead in, the bridge itself, and the Bayfront bike path on the other side. Talk about crumbling infrastructure! The road leading up to the bridge is both grainy and choppy, and the bridge? Yikes, unbelievable amount of glass and other tire-biting debris, so much that I had to boot my tire midspan after I noticed an irregularity when I ran my (gloved) hand over it, making sure I hadn’t picked up glass.

And the other side? If this is what I go to DC to lobby for, I’ve got to change my thinking. They’d recently cut down the grasses and weeds along the path, and not bothered to sweep it. Crud everywhere. And the part where you have to cross the street at the former Sun Microsystems location (now Facebook)? Glass so bad in the bike section that you have to lift your bike over it. And when you get to Marsh Road and have to use the push button to get across, just try and find where they hid it in the shrubs! In my opinion, the Dumbarton Bridge bike path is a disaster, something not suitable for road bikes unless you’re willing to risk destruction of expensive high-quality tires.