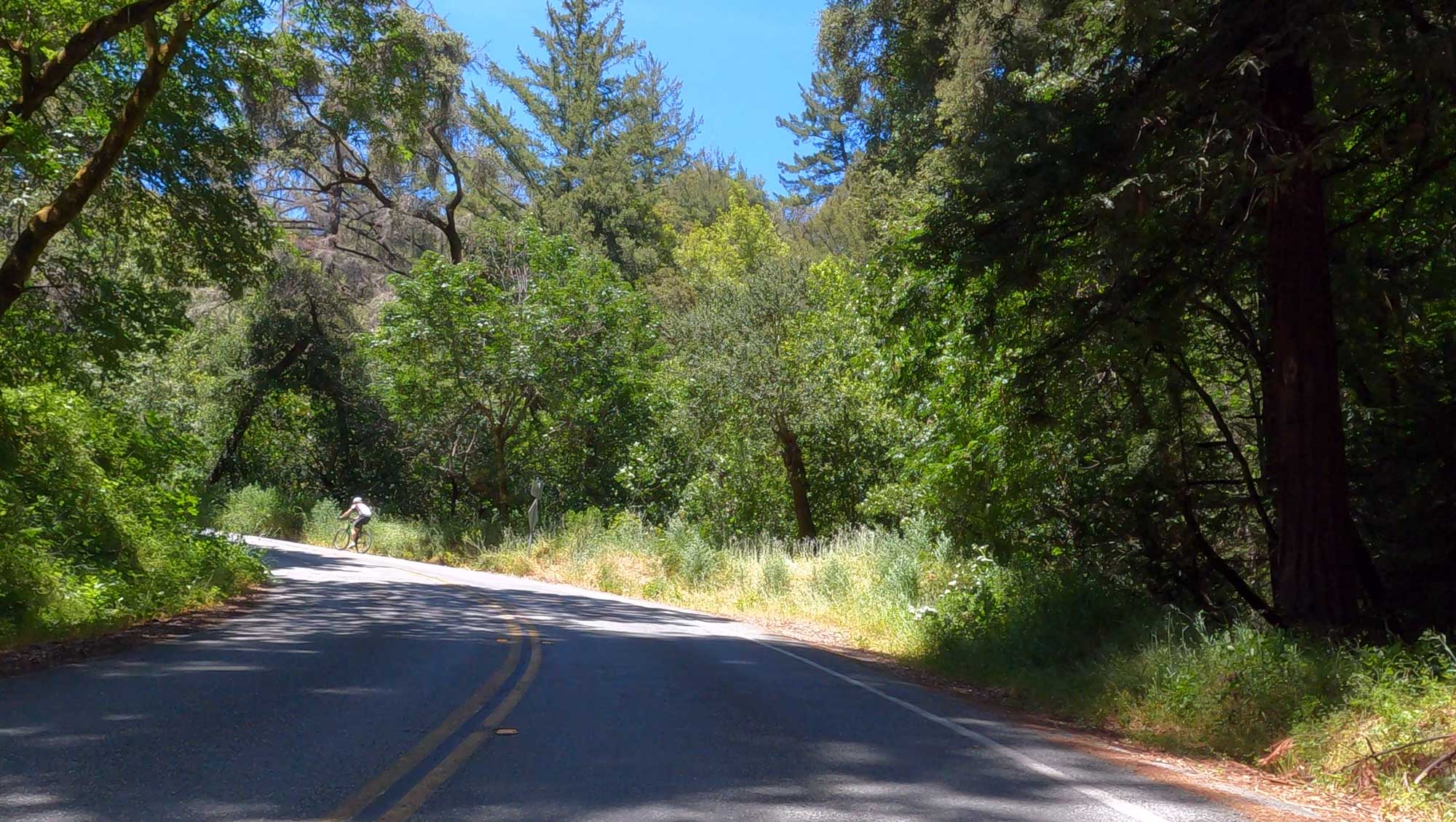 Ugh. That was the last I saw of Kevin on Redwood Gulch today, one of our not-so-fun loops (we call them “ugly” rides) we do when we’ve run out of other options. The original plan had been to do the Pescadero/Tunitas loop, but the forecast called for chilly temps on the coast, upper 50s, and dag nabbit, it’s May, late May even, and it was time to enjoy the sun and a bit of warmth. We got both; not a cloud in the sky and temps into the mid-80s.

This would also be a ride to test out the latest & greatest Garmin Varia car-detector/rear camera/rear light combo. Not sure why I didn’t latch onto the Garmin car detecting radar gadget earlier; it’s been out for a number of years now. In a nutshell, when there are cars behind you, it warns you with a beep and shows their relative location to you on the screen. Perhaps the best feature is that it lets you know how many are back there, so you don’t get surprised when one passes and there are still more. I’ll put up a separate review shortly.

We did the usual foothill ride to the usual Peet’s Coffee adjacent to our former location (Chain Reaction Bicycles) in Los Altos, verifying that the property remains empty as well. The ride’s pretty nice up to that point, and then things go downhill. Well, actually, uphill. It’s not too bad a roll out to the base of Redwood Gulch, but you make that left turn and you’ve got maybe, maybe, a minute or so before things go really bad. Not so bad for Kevin, but for me, I just can’t handle the low cadence required on a really steep grade anymore. My breathing just goes totally to pieces, with power dropping from the 240 watts I can sustain on most climbs, down to maybe 210.

Once onto Highway 9, I come into my own and life is good. Especially since, for Kevin, the opposite occurs. He does better on the steep stuff.

We do miss Mr. Mustard. Haven’t seen him up at the top (Saratoga Gap) in several years now. When we could depend upon him, we didn’t worry about fueling up in Los Altos. It’s nice stopping for coffee and food, sure, but Los Altos is a bit early in the ride for that, and the timing isn’t great, coming just before the big climb.

Skyline was kind of fun; there was a guy trying to stay ahead of us, and he’d make good speed on the flatter sections, while we’d eat heavily into his lead each time the road went uphill. We intentionally didn’t catch him, partly because of rule #1 (never pass someone you’re not certain you can stay ahead of) and partly because we enjoyed the idea that he was killing himself trying to stay in front of us, and we didn’t want to end that.

Probably the most interesting thing on the ride was coming across a car that had missed a turn on Skyline, maybe 100 meters north of Old LaHonda road. We arrived about 10 minutes after it happened, and spoke with a cyclist who’d actually witnessed it. Sounded pretty impressive, sailing through the air into a tree (you could see it broken in half) and landing upside down about 50 below the road. Hard to believe someone could have survived that, but another cyclist on Strava said he’d heard the driver (apparently just one person in the car) came out OK.