I try to make our first ride in France reasonably creative will also making sure it’s not going to kill us. Since it comes the day after arrival, especially after arriving after 8pm local time (and for me, about 32 hours total without more than a brief catnap… if that). In the Alps, making it interesting is a bit challenging if you do a traditional loop of some sort, because the distance can get to be a bit too much. That’s where the local trains come in. You get create a very interesting, greatest-hits version of a ride, by taking the train out and riding back.

The original plan was to do a ride heading east, taking a train as far as Vizille (not really that far, maybe 15 miles, but takes the edge off the ride) and doing a half-loop that would have us coming back over the Col de Mort, the opposite direction we climbed it a few years ago. That option went off the rails when we didn’t get up until 8:30am, missing the early train, and the next one turned out not to be a train but a bus. We’ll be trying that one again tomorrow.

For today’s ride, we traveled from Grenoble to Chambery on the train, then headed up into the Chartreuse mountain range and hit up 3 “cols” (what the French call mountains)- Col due Granier, which proceeds meanly right out of Chambery, followed by the Cucheron (which doesn’t even have a col sign at the summit!) and, finally, the Col du Porte. This ride was nothing but up and down. Just 40 miles, but 40 quality miles, with over 6000ft of climbing. 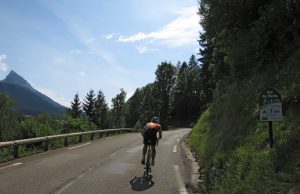 The toughest for me was the Ganier, not because it’s that hard a climb, but the temps were getting up there and I was sweating like crazy, with salt pouring into my eyes. Very frustrating, because it’s a very nice climb. I think most of the issue is that I have very little acclimation this year to really warm or even hot days, so this was a bit of a rude awakening. Fortunately, I didn’t lose strength for the climbs that followed, probably because, as should be the case for all proper climbs, there was a bar/cafe at the top. The ubiquitous 3 euro coke always appreciated.

Our next official stop was in Saint Pierra de Chartreuse, about 2/3rds of the way down the backside of the Cucheron. 1.5 liter bottle water is $.25 at the casino food store. Amazing. Had a sandwich and another coke at a bakery there, enough fuel to get us up over the final climb, the Col du Port. It’s not very long, but unfortunately plagued by a whole lot of bugs that can manage about 7.8mph on 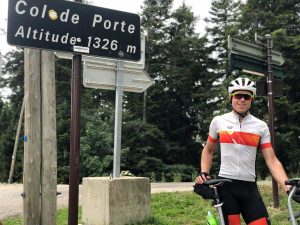 the climb. Unfortunately, I can manage about 7.5mph on said climb. I did find that I could position myself just right, behind kevin, and get shielded from the worst of them.

The descent back into Grenoble should have been one long fun ride, solid downhill mile after mile after mile. Except that I got a rear flat about halfway down. Not a huge deal, but did break up the fun.