Today’s ride felt so much better than last Sunday. Same exact loop, but last Sunday the “thrill” was just getting back to the usual routine again, after a very long time finding things that got in the way, especially for Kevin. Since last Sunday, we had one really cold Tuesday morning ride, and one really cold and drenching Thursday ride. The latter was bordering on epic quality, and that might have been what it took to recalibrate the mind and body to the absurd state Kevin and I consider “normal.”

Today was unusual in that not so many cyclists on the bay side of the mountains, but a whole lot on the ocean side. There might have been more incentive than usual to get in a nice ride before the 49er game too. Getting in a hard ride might be the cyclists’ version of a tail gate party.

The best thing was that I was finally able to get both lungs and legs a workout. No more being able to talk with Kevin on the climbs; I was able to keep the heart rate up and my breathing at max, which in turn meant my legs had more fuel available to them. Nothing terribly fast, but 24 minutes up Old LaHonda is much faster than the 27 we’ve been doing lately. 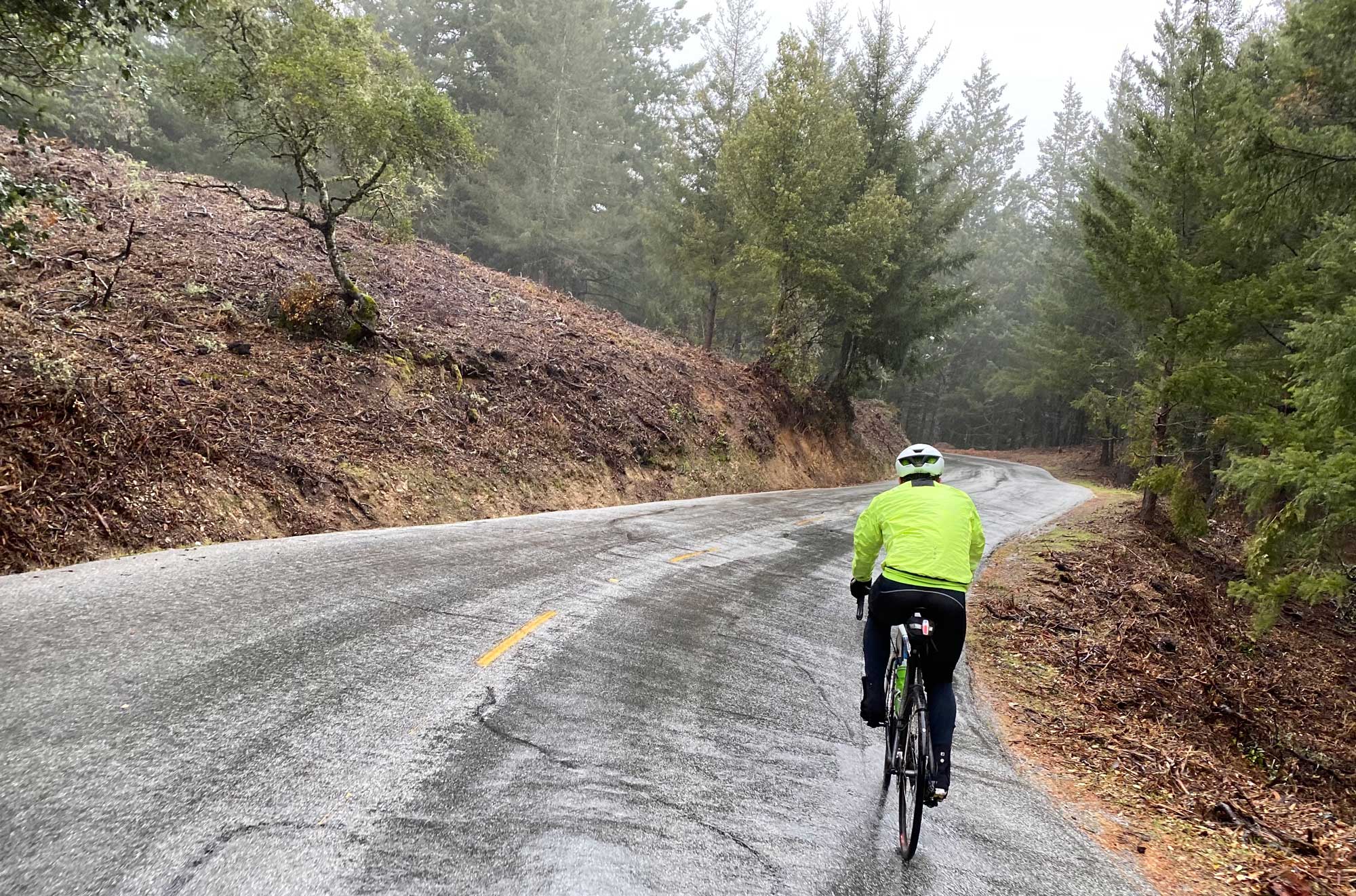 It would be great to get an impressive photo of the heavy rain we hit once on Skyline, but since it was 36 & windy up there, no way to take the photo while riding (iphone zipped into a pocket) and we’re not going to stop and risk becoming an instant popsicle. Rule #1 when riding in the rain- keep moving!

The storm hit just a bit later than expected; when we hit the road at 7:32am it was “just” heavy wind, followed, as we started up Kings, by light rain. Temperatures dropped as we climbs, from a balmy 41 at the bottom to 36 at the top. 36 is normally no big deal, but when you combine it with pretty heavy rain, that changes things. You’re inspired to ride hard enough to keep the fire going, but not so hard you start sweating too much. Last thing you want to do is saturate the mid-weight base layer, standard jersey, jersey-jacket and light rain jacket combo! Kevin and I were actually pretty comfortable waist-up, with this being one of the few rides where wind front thermal bib tights were slightly lacking on the descents.

Gloves? When you know it’s going to be really wet for more than 30 minutes, it’s time to break out the neoprene. Not the most comfortable, but they have the advantage of working better when wet than dry. Still, had that fun feeling in the shower as my fingers painfully thawed, that different sort of pain that is really tough to deal with yet you know it’s going to go away by itself. At least it does have that benefit (going away by itself), unlike the pain that comes from mental anguish. Hate that.

The descent… cold rides in the rain, you’d much rather be climbing. Today was no exception. You really can’t wait to get down to the bottom and get the engine going again. At least disc brakes & 28c tires give enough traction and control you don’t worry about sliding out. Hate that too.

No rain again until Tuesday. Much as it’s fun sometimes to be challenging the elements, I’m ok with a few dry rides. 🙂