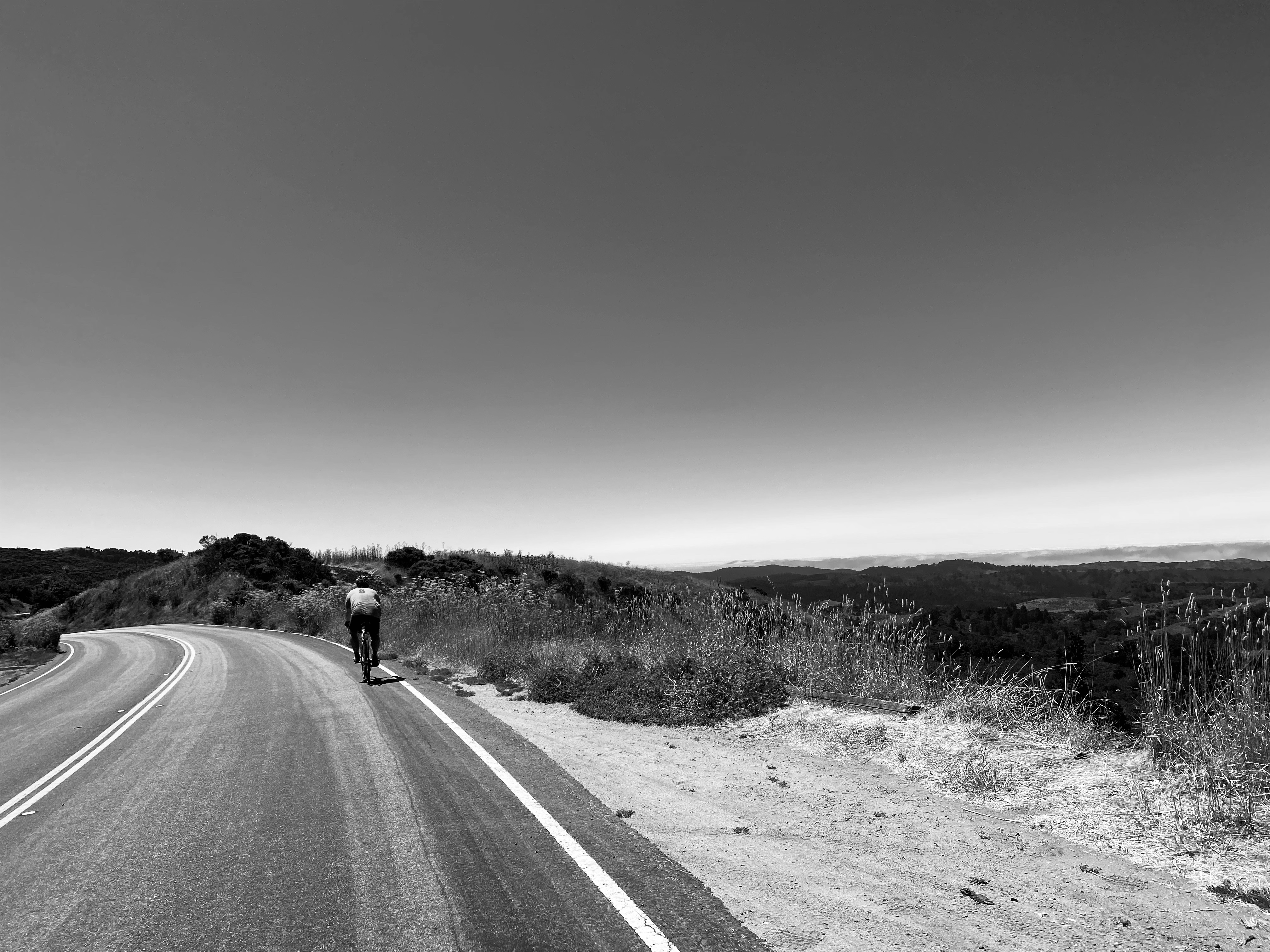 It wasn’t the ride planned. Kevin and I were going to do the Redwood Gulch and return via Skyline ride, with Kevin again on his e-bike. But within a mile from home his knee was causing too much grief so he had to turn back. Actually, me too, but that was because I left my mask at home, and you do t leave home without a mask. More on that later.

It was REALLY slow going on Old LaHonda (the ride had already deviated from the original plan; I didn’t feel like doing a flatter section alone, so that killed the flat-ish section from Redwood City to Los Altos to get to Redwood Gulch). Nothing there. Once up top I decided to do a reverse West Alpine, descending it instead of climbing. As I began heading south a guy rode past on the relatively-easy grade. Just a bit too fast for me to think I should chase and pass, so I sat behind several bike lengths, assessing his strengths and weaknesses because, rule #1 says never pass someone you can’t stay ahead of.

But today, what did it matter? I wasn’t riding strongly; why not be sociable? So I rode alongside and find he’s from SF (but recently Baltimore and a few other places) and heading into this area for the first time. I suggest he try the same route I’m doing, which seemed to be along the lines of what he was looking to do.

Descending the first part of West Alpine, it’s clear this guy (Travis) likes to fly downhill. I’m not keeping up because I’m thinking too much about soft patches of pavement and gravel. But I try to close as we approach the right turn to LaHonda. Going straight takes you into the 7th circle of hell (the steep steep STEEP “no outlet” descent into Portola State Park). He didn’t turn. He didn’t hear me yell. I stop, thinking he’ll soon notice I’m not with him and turn around. I waited a few minutes.

He didn’t turn around.

I’m thinking, bad PR for the shop- Bike Shop owner abandons rider to die finding his way out of Portola State Park. So down I go. And down. And further down. And like I forgot just how far down this road goes! After awhile I’m hoping he didn’t stop until the end, because you might as well get credit for the full painful climb out.

Eventually I did find Travis, just 100 meters from the start of the official climb. Had to explain that, once here, we gotta go that final 100 meters further right? He got that. #respect

Fortunately Travis doesn’t climb like he descends so it was an easy ride out. I could have pushed hard but it was pretty warm and I was already having issues with sweat getting past my headband so it was an easy decision to ride out of hell with him.

After returning to where we should have turned towards LaHonda, we got back on track and headed to the LaHonda Market to refuel. Can’t say I’m presently a fan of LaHonda Market at the moment; they were making no efforts to make sure people wore face masks, notably three motorcyclists roaming the store and not a good sign that the cashier was wearing a mask below his nose either. This is a problem; if we’re going to safely get to the other side of this mess (COVID-19), we gotta suck it up and wear masks in close quarters.

After refueling we headed back up 84; Travis had parked his car at Alice’s. Tons of car traffic, by the way. Just driving? Because the beaches are still closed.

Overall a nicer ride than expected. I will have to go back to Portola State Park again and try and do justice to the climb though.

Kevin (not the Pilot) decided he’d better ride with me this morning because otherwise I’d probably be riding alone, so, knee issue or not, he was out there. Of course, he was out there on his e-bike, and this time we set him up with a bag to carry an extra battery so he could ride at higher power levels and not run out. But I wouldn’t have been alone; Kevin (Pilot) showed up as well.

Now, you would think that fighting off someone on an ebike would be a tough act, but the combination of Kevin trying to take it easier on his knees plus this bizarre feeling I’ve had lately where I can push hard and just keep going… it hasn’t been that much of an issue. We did have to hang back a couple times for Kevin (Pilot) though. Now, I can talk about feeling good and climbing hard again, but that last up until we hear someone coming up behind us and, there he goes, Jeff Z on his new Trek Domane, yelling to me “18 pounds of love!”

Kevin (not Pilot) and I ended up waiting for Kevin (Pilot) at the Park Entrance and again at the wide open clearing. It would be nice sometime to see how quickly I can get up Kings, but it’s also kind of nice not knowing, but thinking it could be pretty fast.

I still wake up each ride morning thinking this might be the day where the steak ends, where I don’t feel that good on the climb. But it’s been about 4 weeks straight where I really haven’t had a bad day.

Weather was really nice for the first part of the ride, kicking up to 62 degrees up on top before dropping to 51 as we found our way to West Old LaHonda and back up to Skyline. It was on West Old LaHonda that we came across Jean, a good customer whom you may have seen out on her bike, wrapped up head-to-toe in white, no skin showing to keep herself protected from the sun. She actually does repeats of West Old LaHonda; this morning it would be three of them.