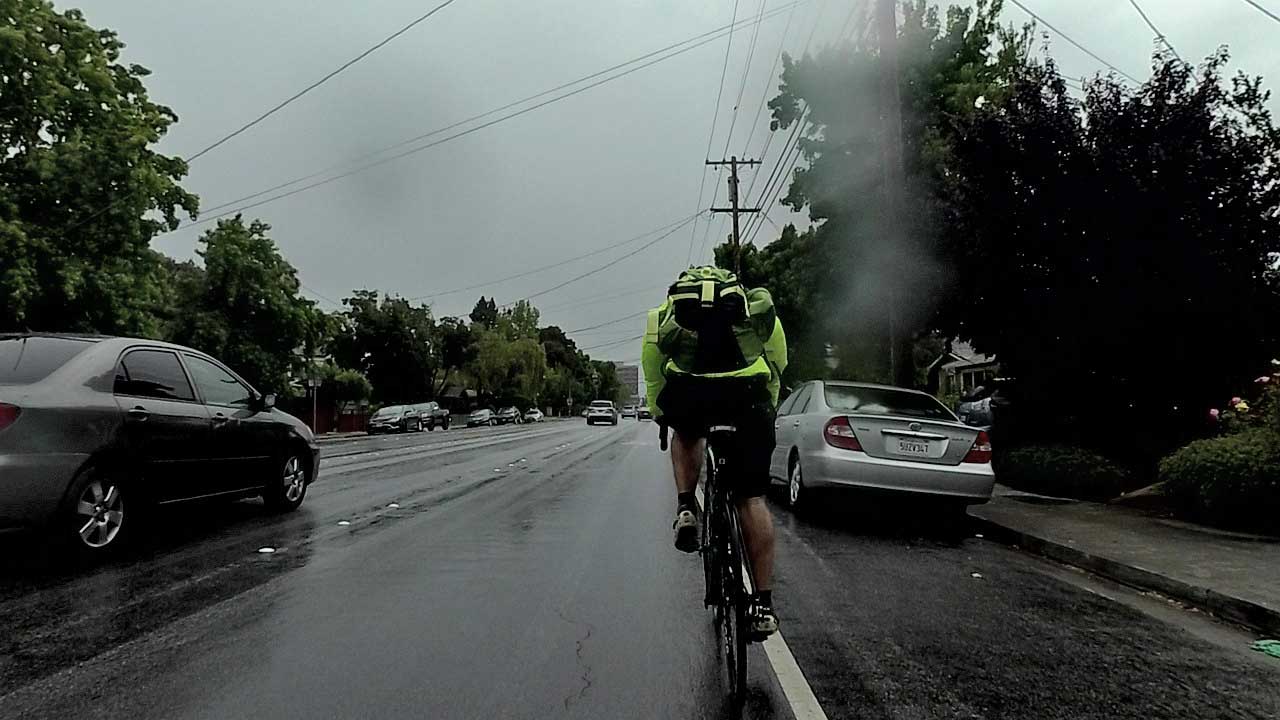 Bordering on the ridiculous? Last night we knew there’d be a chance of rain this morning. 40% max it said. Doesn’t that mean it’s 60% likely you won’t get wet? No, we’re getting used to the goofy wording and now realize, anything 30% or more means that 30% (or more) of the rain will actually fall on you. Anything below 30% and you probably won’t see any rain at all. Nobody will. But 30% plus and it’s only a matter of how much, not if.

This morning it was the two Kevins plus Karen riding up through the park in a light drizzle. Pretty much dry actually, until nearing Skyline. Karen turned around while the three of us continued, on our “regular” bikes ‘cuz why ride a heavier “rain” bike if the odds are 60/40 in your favor of not getting wet? Well, as already explained above…

Up on Skyline we were passed by a woman who was fully “up to speed” while we were getting our act together having just climbed Kings. Kevin (pilot) decided to pick up the pace and latch onto her wheel, and somehow we didn’t get the feeling she appreciated that. I think it safe to say Trump has made some women a bit suspicious of any guy’s motives these days, and whether it was the idea that this was a group of guys who couldn’t let themselves be passed by a woman, or a group of guys with Trump-like thoughts, she may have believed she had good reason to be annoyed. Shortly after we caught up, she pulled off to put on a rain jacket, possibly a convenient way to get rid of us. Ideally, we should be inviting her on our ride, but that wouldn’t be me, breathing heavily and unable to talk.

Given the conditions on Skyline we skipped West Old LaHonda, heading straight down 84 and then doing a loop through Woodside to tack on a few miles. It was kinda nice, riding something different than we normally do.

Of course, as soon as we got home, the rain stopped.

And equally of course, as soon as we began riding to work, it started up again (as seen in the photo above). I have no issue nominating this as the worst year for weather, ever. It refuses to disappoint in that regard. Every time you think the bad stuff is in the past, it comes around again. –MikeJ

2 thoughts on “Somebody, please explain”