After yesterday’s pretty awesome ride up the Col de Charmette (from the goat-path back side), how could we top it? Not with today’s ride, because 60 miles of nearly-flat roads & paths, with high temps and headwinds made for one very tough ride. Strava scored it as only 104 on their “suffer” scale, which puts it with most of the Tuesday & Thursday-morning rides up Kings. I don’t think so. Kings was never this hard. So hard that I was wondering, 35 miles into it, if we would finish it.

It was worth it in the end, because it did deliver us to the finish of today’s Tour de France stage in Valence. Of course, it’s my nature to suggest that any bike ride is worth it, but some are more worth it than others.

The first 15 miles out of Grenoble are on a pretty nice bike path next to the river, and at that point, between 9am & 10am, the temps were quite pleasant, mid-70s or so, and it was shaded by trees. Would have been nice if Kevin hadn’t gotten a flat, but these things happen. Once off the bike path, the temperature started to rise and the winds picked up strongly. The high temperatures for this region of France were not a surprise to us; I’ve been watching the weather reports and every day there’s this warning/advisory running across the top, warning of possible “disruptions” due to “extreme” heat. Extreme is relative; I’ve experienced worse in the California Central Valley, but not with the headwinds we had today. Thankfully we had plenty of stuff to drink, carrying 4 bottles on my bike, two on Kevin’s, plus a stop for cokes along the way. Even so, it’s tough to drink enough when what you’re drinking is really warm.

At one point I remembered Kevin’s first “big” ride, the 33-mile version of the Delta Century. Notable because at the 30 mile mark Kevin pulled over and said that’s it, he was done with riding. If there had been an alternative, I would have done the same. Fortunately, that option wasn’t available because we were a bit out of sync with the local trains running in that direction, missing by about 20 minutes an option near the half-way point. But then we would have missed out on many more miles of mostly-flat roads with strong and getting-stronger headwinds. 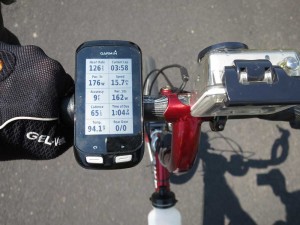 As Valence crept closer, but still seemed so far away, both Kevin and I had the same thought. Maybe Valence isn’t real. Maybe it’s a state of mind. But eventually we did make it, in plenty of time to set up and see the finish of the race. We didn’t pick the best spot for taking photos; we picked the best spot for shade. Funny how that works.

After the race we took the train back to our apartment in Grenoble, ever-thankful to walk into a room that felt almost cold (which is not always the case in France, where air-conditioning is optional). Yes, we could have taken the train to Valence, but we are here to ride bikes, not just to see the Tour de France.

Really, that ride was only 60 miles? I’m sure it would have been a lot easier if we weren’t carrying backpacks with camera gear and, in my case, a rear rack and bag filled with extra bottles, spare tires & tubes etc.

Tomorrow morning we take a train to Gap, where we’ll ride a relatively-short distance to the final climb. Maybe I won’t have to carry so much stuff up the hill!