Sometimes, I type stuff and wonder if it’s 100% those who can’t do, teach. Or do as I say, not as I do. I think this trip to France has allowed me to actually practice what I preach. Breaking two ribs when I crashed in the rain a couple days ago, while in France following the Tour de France with my son… that really should have been a great way to ruin a trip. Create some memories of a year that shouldn’t have been. But I was pretty determined not to let that happen.

There was no way around missing the big stage on Wednesday. When I went to bed Tuesday night, hours after the crash, I could barely sleep. The pain was intense and I couldn’t find a position I could really escape it. Sleep finally came to me out of exhaustion. I knew something wasn’t quite right, especially since there was virtually zero bruising and little tenderness when you pushed and prodded. So no hematoma, probably not a damaged organ of some type. I’m thinking severely bruised ribs. Hey, I can live through that, right?

Wednesday morning I wake up and have to tell Kevin the day’s activities are off; no early morning trip to the train station to intercept the ‘Tour. We were going to the ER. And that in itself was quite the thing; the place was old and deserted and the x-ray machine looked to be from Young Frankenstein. But no complaints about the standard of care, and certainly not about the bill (about $150 including all meds, x-rays and doctor consult). Doctor said I needed to “rest” so the pain would subside.

It’s very difficult to explain to someone who’s primary language is not English that rest doesn’t really work for me and the pain wasn’t all that bad. I did walk to the hospital after all. I told him we were here to ride up the mountains to watch the Tour de France. Surely that should mean something to him. You know, give me some shot to make it all go away like they do with the athletes right? I’m certain the only reason we didn’t see eye-to-eye was the language barrier. 🙂

I got a prescription for 1000mg tylenol up to 4x daily, something called Ketoprofene, which is a strong inflammation reducer, and Pantoprazole, which counteracts Ketoprofene’s attempts to burn a whole through your stomach.

And y’know, I started feeling a whole lot better really fast. There are specific movements which make me want to howl, but I manage to stifle them. Getting up out of bed or a chair I have the appearances of someone old & feeble, but once on my way, I feel great. I mean literally really good (which I suppose is actually a step below great). 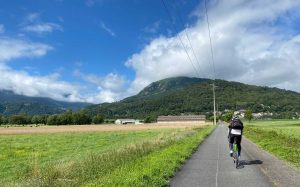 Last night (Wednesday) I started putting together plans for Kevin to do the ride today all on his own. His first solo gig in France, or any foreign country for that matter. It’s not as if he shouldn’t have picked up a lot of “what do to, how to get around” stuff from me over the years. He can do this. I had concerns about his epilepsy of course; what if he had a seizure out in the middle of nowhere? So we wrote up a note he carried with him, had some duct tape attached to his bike, and the idea was, if he felt a seizure coming on, he’d tape the note to himself so nobody panicked at this guy having a seizure (all you have to do is wait 2-3 minutes and he comes out of it perfectly fine).

And we figured out how to use Strava’s “beacon” feature so I could see where he was, in real time, at all times.

So this morning I get up and go over the route and everything with him, and I’m thinking the unthinkable. Why not try riding my own bike, down the bike path that heads out of town? Maybe just the first few miles, then head back. I didn’t bother with cycling clothes, just shoes, since I wasn’t going very far and shouldn’t push it. In fact, I rode the first 12 miles of Kevin’s ride, turning back at “our” food truck, the green sandwich truck at the very end of the bike path. From there you

But dang I wanted to keep riding with him! It was a good thing I wasn’t properly dressed, to avoid any temptation. And there’s no way I could have kept up with him; he rocketed up Luz Ardiden. He met new friends up there, he found a great spot for photos, and he got the shots. He got stuck in one of the “pens” on the way down (where they hold up cyclists for up to an hour, letting all the ‘tour trucks go through first), and this didn’t rattle him because he’s been through it all before. He had no problem with the detours either.

He made it back in one piece, and was about the happiest I’ve ever seen him.

If I hadn’t figured out that there was no reason for Kevin not to do the ride on his own, if I’d had to stay in the apartment all day, if I hadn’t ventured out and walked pretty much around the entire town of

Lourdes looking for a spot to get photos (because on the ‘tour’s way to Luz Ardiden, it first passed through Lourdes, just a block from where we’re staying), if I hadn’t gotten out on that short 25 mile ride this morning… pretty much every memory of this trip

would have been bad. The extra day it took to get here due to missed connections. The luggage that didn’t arrive until today. The broken ribs.

But that’s not how it played out. This will probably be Kevin’s favorite trip ever, largely because of his experience, on his own, today. That’s pretty cool. And yes, I’m insanely jealous that he got to ride up Luz Ardiden while I had to watch it on TV.

1 thought on “You have to adapt. It’s not what a disaster is; it’s how you look at it.”