Kevin and I needed to do something a bit different, but not radical. We’re not yet ready again for a Santa Cruz run, but I was thinking Kevin missed out on this year’s New Years Day Mount Hamilton event, so maybe that? He bit. So we got on the 9:21 train from Redwood City to San Jose, rode through the gauntlet of stop lights that makes a few miles seem like many more, and climbed the Bay Area’s biggest mountain.

Proper clothing was tough; the weather report made it sound like it was going to be much cooler than it ended up being, so we had base layers and leg warmers. Kevin ditched everything at the base of the climb; I kept on the base layer but removed the leg warmers. And yes, as the temps stayed in the upper-70s, I wondered if that base layer was a bad idea! Fortunately (for climbing), the temps did drop quite a bit as we rode up the hill.

About my peeps. Yes, those are turkeys we saw, on the first descent (into Grant Ranch). Lots and lots of turkeys. Pretty big turkeys. We also saw very large feral hogs too. And huge vultures. And a tarantula. But no bobcats, no mountain lions, no coyotes.

I managed to keep a pretty steady pace all the way up, staying on Kevin’s wheel. Our 1 hr 44 minute time was pretty decent, all things considered. And this time, the top was open! We were able to ride all the way up to the observatory, which was pretty much deserted… just a few other cyclists, one or two cars, that’s it. The coke machine is now $1.50, but we had enough. The views were ok but not spectacular; a bit too cloudy. But nice enough to appreciate that the only way you’d get a view like that was after a lot of hard work.

The descent? Not fun. It got colder in the brief time we spent at the top, so even putting on all the colder-weather gear, we still were pretty chilled for the first descent. It finally got pretty nice around Grant Ranch, but the changing winds made the descent less than fun. And getting back to the train station? It seemed like every light was red. I joked with Kevin that it would be a good route to bed in disc brakes. 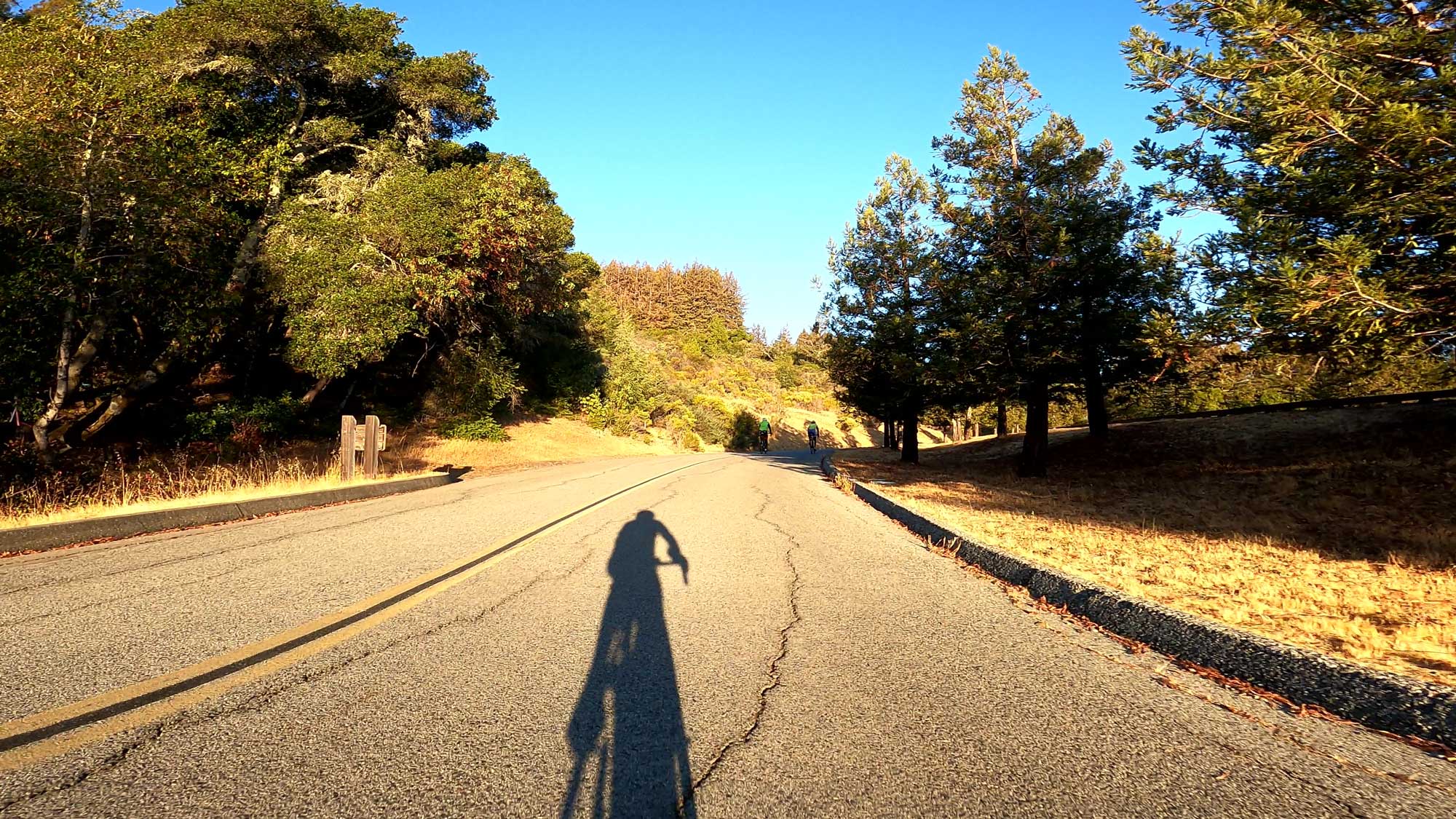 I’d thought, with Kevin being off the bike for a week, this would be my day. But it wasn’t. Instead I got to watch Kevin and Karen easily ride away from me, and it wasn’t even a breathing issue. I’d thought it was going to be another very cold morning, and with the circulation issues I’ve been having in my hands, thought maybe I should try something that didn’t work out 10 years ago- Amlodipine, a calcium-blocker that has benefitted others with Raynauds. The reason I didn’t stick with it way back when was because it had terrible side effects; it kept my heart rate from increasing with effort, and another issue I wouldn’t discuss in polite company. But that was then, this is now, and I’d already had to have a visit with a vascular surgeon earlier in the year due to some blisters that turned to wounds that didn’t want to heal. I figured I’d give it another try. I figured wrong.

I knew things weren’t going well heading over Jefferson to the start of the ride; my Garmin was thinking I was in great shape because my heart rate was low compared to effort. I got a +6 (about as high as you can get) when I felt like a -10. Kevin and I met up with Karen at the start, and I was fine until we started climbing through the park. I should first mention this might be the last time through the park for a week or two; they had signs saying “no cyclists” and “road closed” but Karen said she’d heard that was from 8am-4pm. We got through but they were already setting up to clear away vegetation and any later, we would have been in their way.

Halfway through the park, right at that first steep pitch, Kevin and Karen were gone. They nicely waited for me at the park exit onto Kings, probably thinking I’d regroup and do my usual thing of picking up speed on the middle of the climb, but… not today. That heart rate just wasn’t going anywhere. Thoughts of turning around were never too far away, but I kept plugging away, seeing Kevin & Karen for the last time as I started the long open section (1.41 miles to go) just as they were exiting the top. They likely finished 5 minutes ahead of me, or at least Kevin would have, but at some point he turned back to see where I was.

Once up on Skyline I felt a little bit better, maybe a little bit more better as we got onto West Old LaHonda. High point of the ride had to be seeing a bobcat race across West Old LaHonda, right in front of Kevin! It’s been literally decades since I last saw a bobcat (that was on Kings), and the first-ever sighting for Kevin.

In the end, it was another ride where, when I got home, I was glad I rode… but it would be tough to claim I felt that way for most of the ride.