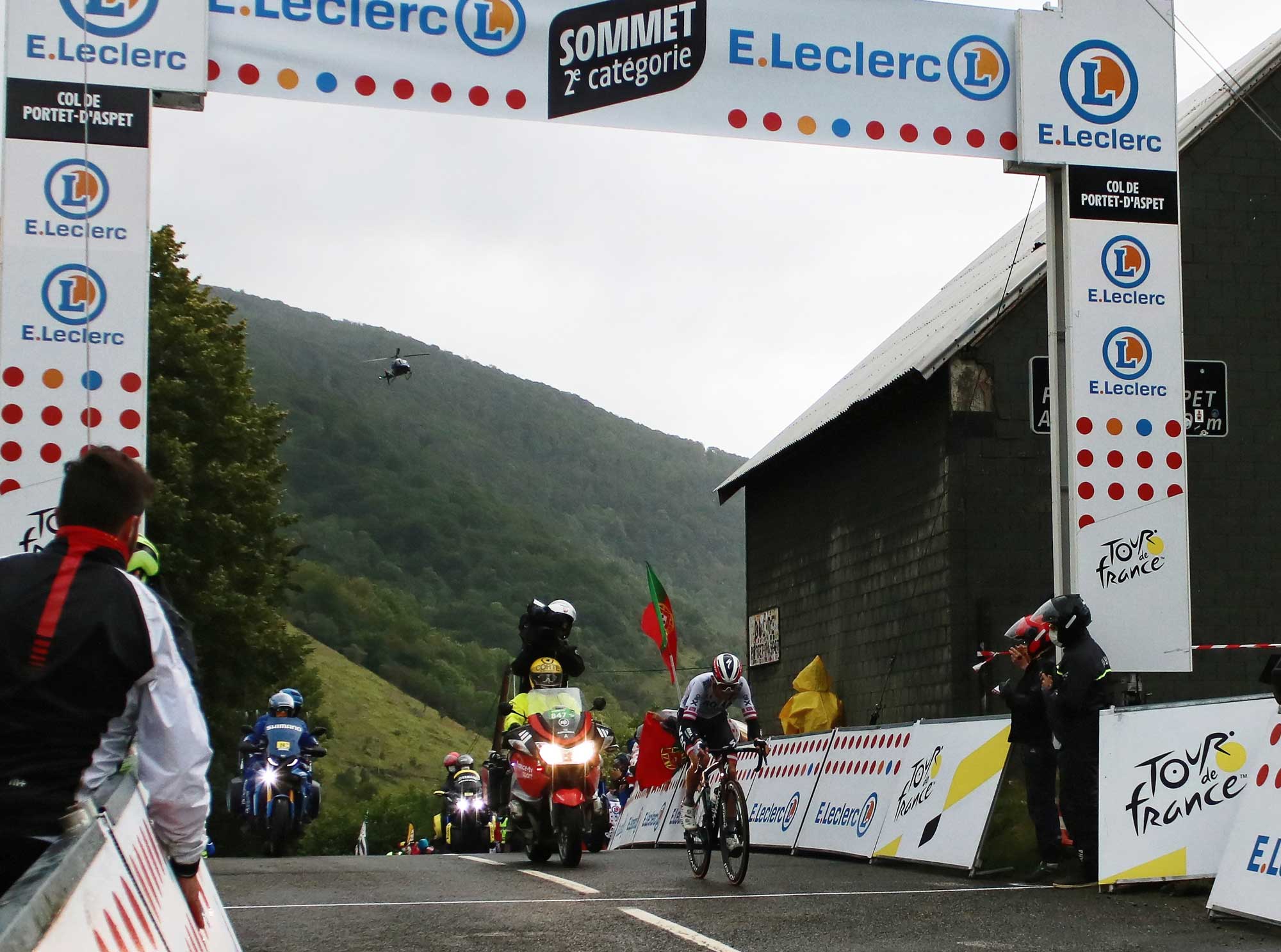 We knew it was going to be wet & messy, but what the heck, the weather forecast made it appear that was going to be the norm for the next 3 days. What are we going to do, stay in the hotel room and watch on TV? That’s not what we came here for!

So we rounded up some extra cold-weather gear before heading out on the 10:23 train to St Gaudens. The first 20k or so is flat with a few small climbs, and then you get a mellow intro, pretty easy grades, for the next 10k or so. And the rain that was falling pretty heavily when we arrived at the train station? Pretty much disappeared!

Unfortunately, it started getting pretty cold as we worked our way up the last steep 4.4k of the climb. Really steep; average 9.7% according to the signs. But thankfully, while the roads were still damp, the rain had stayed away. We got to the top with plenty of time to spare; easy to find a good place because it really wasn’t all that crowded.

But about half an hour before the first riders came through, it got even colder and… wet. Despite all that we were wearing (and we were wearing a lot!) both Kevin and I were still having a tough time staying warm enough… and all around us were people in bare legs???!!! What’s with that?

So maybe an hour up on top in the cold and rain, but hey, somebody watching the coverage on their phone said the cameras had some good shots of me. I’ll have to check the replays later.

Descending. Good to get off the higher elevations and down to where it was warmer! Unfortunately, the Gendarmes stopped us about 1/3rd of the way down, letting only official vehicles use the road. This was an issue because we had a train to catch. That wasn’t going to happen now; so we hit St Gaudens about 20 minutes late, with the next train 1.5 hours away. Time to go into town and get some food, right? Of course.

And that’s when the really bad luck came in. Bringing a pizza back to the train station, my rear wheel kicked out (hard enough to tear rubber off the tire) when Kevin realized he needed to go left instead of right. I hit the ground hard. Saved the pizza! But feels like I bruised a rib or two, which will likely seriously cut into our planned rides. Some movements are painful! There is no way I see myself heading up the big climb tomorrow, the Col du Portet. On Bastille day, no less. This is going to be a huge disappointment to Kevin, since we weren’t able to get to the top last time when they shut down the road ahead of us.