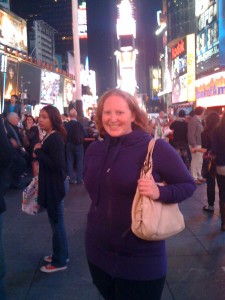 Took the mega bus from Philly to NYC today. We had tickets to see Wicked and it was AWESOME. Everything in it was amazing, the songs, the sets, the costumes, it was great. The only downside was that Kristen Chenowenth and Idina Menzel were not playing Glinda and Elphaba (I’m a huge Glee fan, and they have both had guest roles), but it was great all the same. And I think it’s pretty cool to see a show on broadway.

We then went to pizza at a place by the David Letterman Show and it was superbly delicious. I must say that I have been converted to the east coast way of eating pizza, folding it. Then, we went exploring a bit and spent some time in crowded Times Square. Walking back to the hotel, we grabbed some cheese cake from juniors (HIGHLY recomended!) and are now having a quite night in watching silly girl shows. Tomorrow should be a big day of museum hopping an sight seeing!

This entry was posted in Uncategorized. Bookmark the permalink.