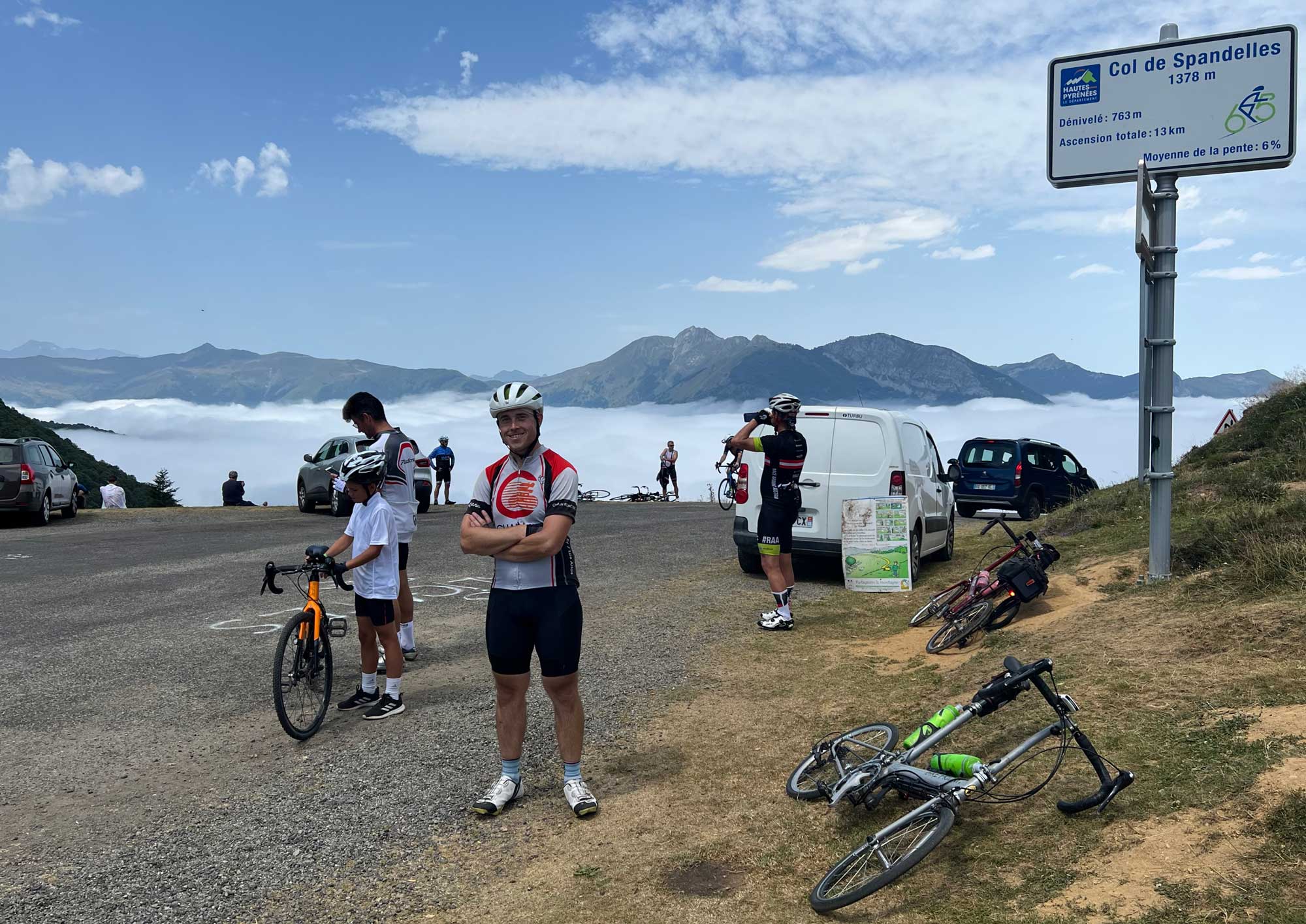 It was a bit of a close call. I had everything set in place for viewing today’s stage (ending in Foix); it was largely a copy of what Kevin and I did in 2012. Take an early (6:28am, ouch!) train from Lourdes to Toulouse, connecting there to a train to Foix, arriving 11am. Ride the course backward to the top of the final climb, watch the stage, and then ride like mad about 40 miles to a train station in Boussen for the trip back to Lourdes. It’s something of a risky plan in that, if anything happens mechanically, or if bad weather hits, you’re not likely to catch the 8:18apm train in Boussen. The fall-back is a train an hour later, that doesn’t quite get all the way to Lourdes, ending in Tarbe. About a 45 minute ride at 11pm, but hey, we got lights, you do what you gotta do.

Late last night, and I mean late, after Kevin’s already gone to sleep, I check the train schedules again. And every single train from Toulouse to Foix… cancelled! Cancelled due to the high temperatures that have been causing issues for all manner of transit (aside from bikes, because of course, we really enjoyed yesterday’s 105 degree temps!).

I briefly considered a pretty long out & back from the Boussens train station, but decided it involved a few too many moving pieces, too many things that had to go right, and the weather forecast was for thunderstorms from 2pm-on. So we ditched seeing the ‘Tour today, and instead did a local loop including the Col du Spandelles, this time in the direction the race will use (we climbed it last year from the other side).

Let me tell you, the Spandelles is a BEAST of a climb! Crazy steep, and it’s featured in Thursday’s final Pyrenees stage, the one that ends on the Hautacam. I have to believe we’re going to see some action on that climb; it’s one of the few in France that is so steep that drafting really isn’t going to be a big factor.

For me, I’ve gone over to the “bring it on” club. I am riding so much better than last week; every single day has seen an improvement. In retrospect, it was a mistake to start out with the Chamrousse near Grenoble. I wanted to hit the ground running, especially after the late arrive in France (getting to our apartment at 11:15pm instead of 3pm was less than idea), but it really was too much, too soon. Also, that was my last ride not using an albuterol inhaler. I think it’s pretty clear now that I do ride better using it, than not.

Tomorrow we see our first Pyrenees stage, completely by bike, no trains. Riding an out & back from Lourdes to the top of the Ancizan, a climb that parallels the Aspin. The weather has cooled down so it should be a pretty good day on a bike. The next day (Thursday) we ride to Hautacam, a very short distance in miles (16 each way) but a pretty stiff climb. The Friday morning we take a train (yikes!) to Toulouse, flying back home, hopefully uneventfully!