Not the planned ride today. Originally was going to be Pescadero/Tunitas loop, but even if we hadn’t felt awful after climbing Old LaHonda, the cold overcast enveloping the coast was less than inviting. We weren’t dressed for damp 50s, and while we could have survived just fine, all the cold damp weather we’ve put up with on Skyline on Tuesday & Thursday mornings… we’re kind of done with cold and damp! 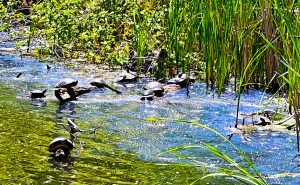 Thought about turning around at the “view” spot on West Old LaHonda (where we could see all the fog on the coast) and heading south on Skyline then down 9, but decided instead to do West Alpine then descend Page Mill & Moody in to Los Altos, looping around a bit to get at least 50 miles. Just doing either West Alpine or San Gregorio/Tunitas comes out to 43 miles, and that just doesn’t seem like enough to get the job done.

West Alpine was almost as painful as Old LaHonda, but we survived, followed by the less-than-enjoyable descent of Page Mill & Moody. Our next bikes, with disc brakes, are going to make that a lot more fun.

Instead of heading all the way south to where our old shop used to be, and hitting up the Peet’s Coffee there, we dropped straight into downtown Los Altos, looking for the Peet’s there. Couldn’t find it. Where did it go? Maybe just hidden behind too many umbrellas? Whatever the case, we continued down the street and stumbled upon Satura Patisserie (200 Main Street). Great find!!! Perfectly made Cappuccino, and chocolate-covered croissants to die for. The combo cheese/cranberry/something-else scone was great too.

Refueled, we headed back via Fremont Street (hadn’t done that for a while), Arastradero, Portola Valley and Woodside. Not fast, but feeling a lot better than we had earlier in the ride.