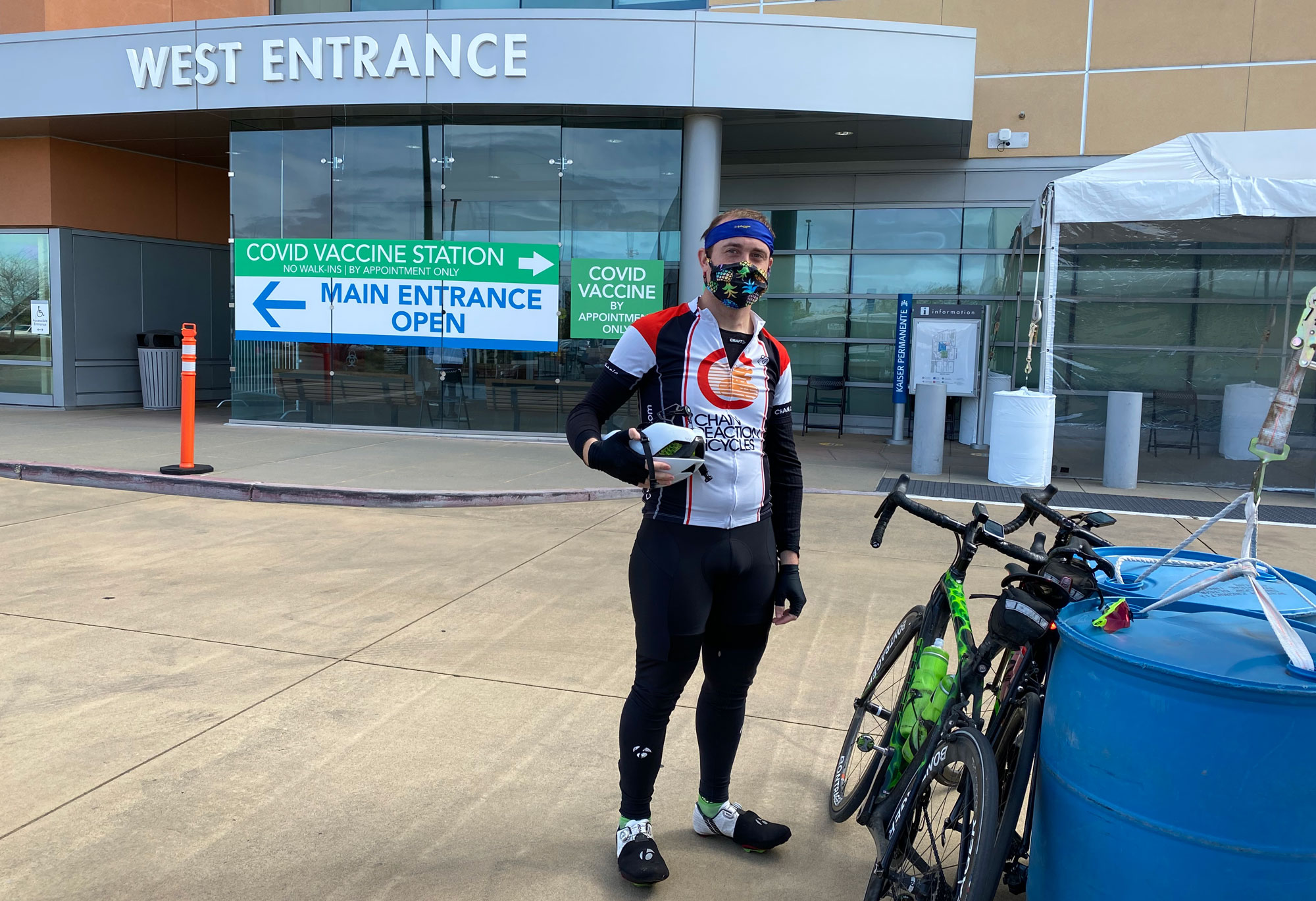 San Leandro? Really? That’s the closest place Kevin could be vaccinated by Kaiser, at 10:20am. Ironically, it’s the same time that my wife also secured a vaccination slot, also at Kaiser, but at the South San Francisco location.

The original plan was to drive to San Leandro, get vaccinated, then do a ride in that area, maybe Mt Diablo. But I generally try to avoid driving if possible, and thought maybe it was time to try a hybrid ride that included public transit. Could that be done?

So late last night I went over BART schedules and Strava estimates for how long it would take (by bike) to get from home (in Redwood City) to the nearest BART station (Union City). And it looked workable. BART leaves Union City at 9:34am, arriving in San Leandro, about 2.5 miles from Kaiser, about 20 minutes later. Should work. And, it did.

We left home about 7:40am and made it to BART with 15 minutes to spare. Of course, we used up 10 or so of those minutes just trying to figure out how to buy Clipper passes on their new machines, but hey, it worked. I’d by lying to say it was a lot of fun riding the approaches to the Dumbarton Bridge, as well as the bridge itself. It’s a real mess navigating the maze around Facebook, and the pavement in places is awful. And we had that coming and going!

The vaccination went without a hitch. The return ride though… a bit of a mess at first. I didn’t have time last night to really go over the route Strava was suggesting, so I didn’t trust a few turns and went rogue, making things up a bit as we rode along, in an area I really didn’t know my way around. But, you could see the hills, you knew about where you needed to get, so what could go wrong, right? And nothing really did go wrong, although the main drag we ended up riding was one red light after another.

We did find a pretty nice coffee place a few miles prior to climbing Palomares, where we had, naturally enough, coffee and bagel sandwiches. Fuel for the Palomares climb. Most interesting thing about Palomares are the amazing homes along the way. Definitely worth checking out, as opposed to just treating the climb itself as the main event.

Too bad Palomares doesn’t last; it gets pretty old riding those endless trails along the riverbanks through Fremont to the Dumbarton approach. Normally you’d think, great, get off the main roads, enjoy a peaceful experience for a while. But you can get too much of a good thing, and it sure felt like that after a while. But eventually you’re back on the Dumbarton approach and wishing, with its horrible pavement, you could be someplace else. Almost anyplace else!

Got home before 3pm, about 72 miles total, which I think is the longest ride in some time, for both of us. Just nowhere near enough climbing, a bit too much wind, and missed the smoother pavement on this side of the bay.