It was such a cool shot, or it should have been, but dang, maybe I waited too long, maybe it was the wrong angle, maybe there’s a lot more the eye can see than the camera. The top of Kings, the faster folk cooling down a bit waiting for the rest to come up the hill, and I swear, there was steam coming off the tops of the riders heads in the relatively-cool (about 40 degrees) air on Skyline.

If it had come out, it would have been cool-enough to make up for my screwing up and hitting the start-stop button at the base of Kings, stopping my computer entirely, instead of the segment timer. I recognized my mistake a couple minutes later, too late to have any real idea of my speed up the hill. The only thing I could go on was that the two Kevins were ahead of me, JR just a short distance behind, the rest following a minute or so further back. 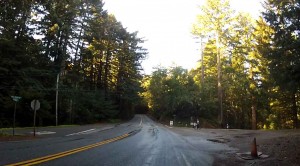 Kevin (my son, not the geezer pilot) later told me they weren’t that far ahead of me at the top, but the picture to the right shows differently; if you click on it so it enlarges, you’ll see geezer pilot Kevin coming up from the Tunitas side of the hill, where he’d gotten rid of the excess Diet Coke he drinks so much of in the morning. Given geezer pilot Kevin’s age, it’s not like he can take care of such things instantly, so I was apparently much further behind them than led to believe. By the way, geezer pilot Kevin is only a few months older than I. Guess that makes me geezer dad of younger Kevin.

The ride was most-noteworthy for being a lot more wet than expected; this was one of those rides where the skies are clear but your bike gets trashed from all the water and crud coming up from the road. The sort of day that puzzles people because they don’t understand why their bike’s a mess when they bring it into the shop, because they say they don’t ride in the rain.

Overall, just another nice “winter” ride. We should have quite a few more of them, now that I’ve got my ‘cross bike all set up again, ready for rain that will likely never come.