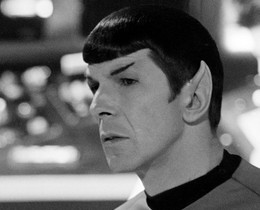 It can’t possibly come as a surprise that I was a bit of a nerd in grade & high school. In fact, I’m remembering, for the first time in ages, one of my school nicknames. “Mr. Scientific.” Odd that I’d not thought about that since school, 40 years ago.

The attraction to Star Trek and Spock in particular was logic. Making sense out of a nonsensical world, which pretty much defines being a teenager just as much as it defines someone who’s at the fringes of any spectrum, political, religious or financial. Logic, or pretending to be logical, allows you to construct a scenario that makes sense to you, a rational way to explain irrational things. Everything else can still be whacko, but you’ve got a path.

There was also Spock’s sense of alienation, being different from those around him. Again, a teen anthem, at least for me.

And finally, and this is what really helped out with my then-chronic Osgood-Schlatter disease, the idea that pain existed only in the mind, and if you could control your mind, you could control pain. Drugs weren’t the answer to pain management; changing your perception of the pain, the experience of pain, was. Worst-case scenario, the pain would be gone at some point, and all that separated you from that point was time, and what is time anyway? In bike racing I relished pain; I’d take it out and imagine it outside my body, looking at me as I climbed, fueling my effort. Totally derived from Star Trek/Spock. An example of Spock’s mind over matter can be found in this short Star Trek clip.

My kids are going to read this and think yeah, Dad’s a nut case. Knew that. My wife will read this and think nothing new here, move along, I’ve lived with it for 39 years, what’s another couple of decades. And I’m thinking, of all the influences for good and bad on a teenager’s life, Star Trek was up at the top of those “good.” Even Leonard Nimoy’s death pointed to an amazingly-positive thing about Star Trek. He died of pulmonary complications related to heavy smoking back in the day. Reading that, I realized that nobody smoked on Star Trek. A show in the 60’s, when everybody smoked. But not in Star Trek’s world. Amazing thing, that.

While reminiscing, I recall quite vividly the first time I saw a Star Trek episode. It came on past my bedtime/TV time (I would have been 10 on December 15, 1966 when it first aired), but we’d inherited this ancient B&W TV from my grandparents that sat in a corner of my room, and I’d turn down the volume and dim the screen and see what’s on. I came across the classic Star Trek episode Balance of Terror.  To say I was mesmerized is an understatement! It remains one of the best-written interstellar space battles ever (which makes sense, given that it’s largely a re-write of “The Enemy Below”, one of the best WWII submarine vs destroyer movies ever).