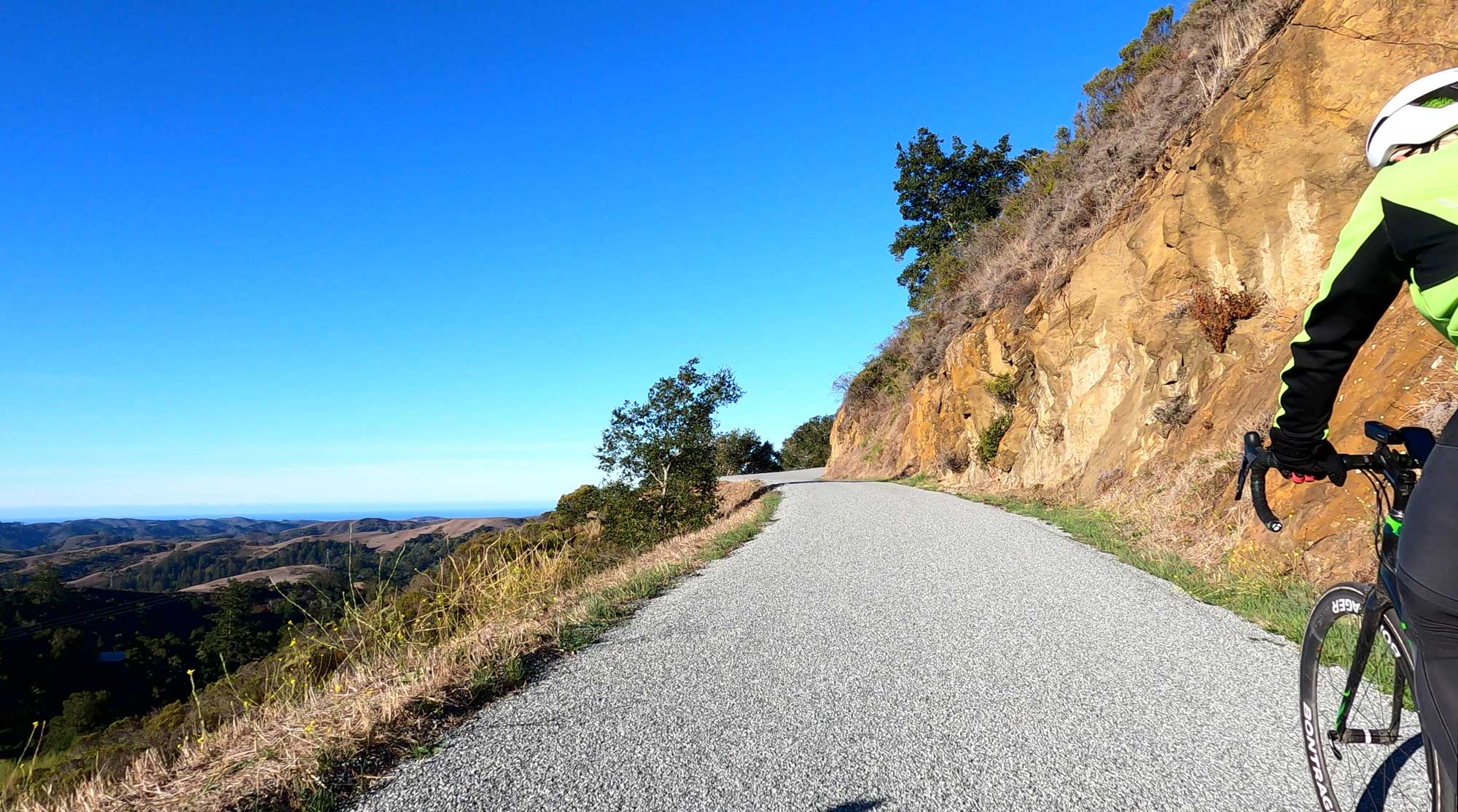 First pretty darned cold ride of the year. Had to happen sometime. At least, unlike Tuesday’s ride in the rain, we were on the right bikes, and dressed appropriately.

Nobody but us (myself and Kevin) this morning. The cold morning even delayed our exit from home as the garage door wouldn’t close (the battery for the outside remote had lost too much of its power from the cold). Heading to the start, it was the first time in ages that we had to be looking for ice in the corner I broke my pelvis almost 4 years ago. My heated gloves were getting a workout; there is absolutely no way I could be out riding in weather like this without them. Unfortunately, there’s no heater for the air coming into my lungs. Heading up through the park was really tough, but things got a little bit better once on Kings.

Until my fingers had a lot of trouble working the shifters. I was certain my Di2 shifting had gone completely haywire; I’d try to shift to a lower gear, and it would click into the lower gear and then very quickly come back down and settle into an even-higher gear than I’d started with. That can really bring you to a standstill if you’re not having a great day! I actually stopped at the first long clearing section to check it out, and determined no, it was just my messed up cold hands (even in electric gloves!) that were having trouble with the levers.

We were slow, but it seemed OK because we did warm up gradually as we climbed. Skyline was, well, crisp might be the right word. A small amount of power was returning on the small climbs, and I was looking forward to the West Old LaHonda grades just as a way to stay warm. And yeah, that did happen, but I’m wishing it was just a couple weeks ago when it was 60 degrees on that section instead of 39. But we did get a really pretty picture!

Definitely a ride where we felt better at the end than the start, as nearly all rides do. 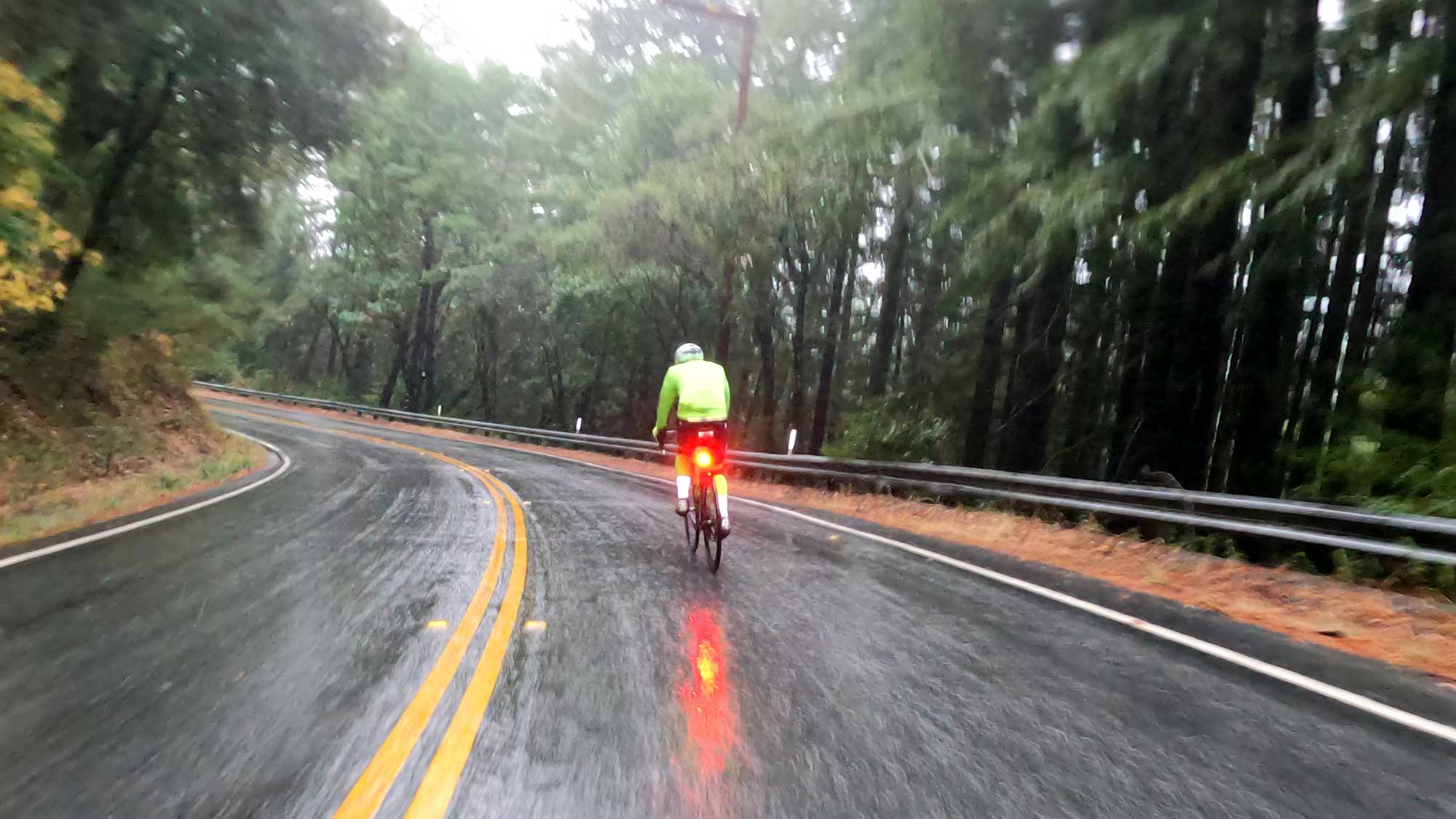 Monday night the forecast wasn’t looking good; rain from 8am-11am. I mean, seriously, the point is to target our ride? I made sure the rain bikes were ready to go, and figured it would be wet, for the first time in quite a while. But by the time we got up, a miracle! The new weather forecast said rain between 11am-1pm! Yeah! So we set out on our nice bikes on what should have been a nice ride.

Never mind that we could see the clouds up on Skyline… just heavy fog, right? Right. About 3/4 of the way up Kings, it began to drizzle, and as we headed towards Skeggs, it turned to real live rain. And cold. Well, not epic type cold, but when you weren’t thinking it was going to rain and you’re facing rain and maybe 43 degrees, well, definitely not what you signed up for. Not a whole lot of fun descending, but you just kept thinking how much you wanted to get down to the bottom, warm up a bit once you could apply some power to the pedals.

And no, we didn’t do the West Old LaHonda loop, rationalizing that it wouldn’t be a good idea riding across a recently-graveled road while its raining, since water has a way of causing gravel to really cut through tires.