It's time to put away thoughts of rectangular hay bales


Two weeks from tomorrow, rectangular hay bales will be a thing of the past, as they magically turn round. And donuts turn to delicate pastries, and sandwiches become baguettes.

And the cars expect to see you on the roads and move out of the way from the moment they see you, and almost every mountaintop has a small bar/cafe serving cokes and coffee. Trains take you everywhere you need to go, and they have special racks to hang bikes, rather than just have them piled against each other.

There are few Starbucks around but there's something special about 1.50 euro double espresso shots in little paper cups from the Relay shops at train stations. You can find nearly everything you need, at very good pricing, at Monoprix, which is kind of like a miniature department store that somehow knows exactly what you need and doesn't have endless aisles of what you don't.

As if it were that easy. In the emerging-from-Covid world, everyone wants to travel, but the airlines don't have enough staff, nor the airports, so hundreds, sometimes thousands of flights are being cancelled, every single day. The nearly-empty planes Kevin and I flew last year are a thing of the past; no way to buy yourself out of the cheap seats without spending a whole lot of money. Thanks goodness I made the decision to not have a connecting flight in the US!!! We fly SFO-Munich, then on to Lyon, where we catch an hour-long train to Grenoble. With a little luck, that should go much smoother than last year's debacle when we were delayed 4 hours in Newark, causing us to miss our train, spend a night in Paris and fly to Toulouse the next day, giving Lufthansa the opportunity to lose one of our pieces of luggage.

But today it was our first ride back to Pescadero. It seems like so much longer than 4 weeks we last did this loop! Things got interrupted by Covid a couple weeks ago; in theory, today should have been a ride to Santa Cruz. The plan is to try and get as many longer rides in as possible before tackling the big long climbs of France. We weren't fast, but not in the dreadfully-slow category either. Kevin actually got pretty frisky on the first Stage hill, possibly going for a PR until his original (and virtually non-functional) implanted epilepsy device went off, as it does every 5 minutes, and wrecked his breathing. 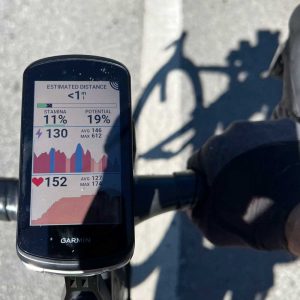 Nice temps although just a tiny bit chilly on Stage Road where it ran right at the edge of the fog. On the flatter, lower part of Tunitas, I joked with Kevin that this would be a good day to take the tunnel, as neither of us, at that point, felt like we had anything extra in the tank. We did sneak past one guy on the climb, after which Kevin took off and I didn't see him again until the top.

By the time we got back, there really wasn't much left in the tank. Even my new Garmin said so; it has a mode where it shows you your estimated remaining miles before death. Well, not actually death, but the point at which you're not terribly efficient anymore (pedaling squares, as Paul Sherwin used to say). About two miles from home, it said I had less than a mile left in the tank. Not as far off as I would have liked!

But overall it felt like a good day on a bike. We came home feeling like it was just the right length. Hopefully next week we'll be stronger.