What a difference a few days makes. The top photo is from today’s ride; the smaller photo on the right is last Sunday. But while it was bright & sunny, the sun wasn’t working all that well.

6 showed up for the ride today; Kevin, Kevin, Karen, Dave & I think the other guy was another Mike? Plus me of course. This was a significant ride for younger Kevin; his first “full” Sunday ride in quite a few months I think? He hasn’t been to Pescadero in ages. Between his knee, and sometimes just not feeling too lively, he just hasn’t had it in him for the “usual” Old LaHonda/Pescadero/Tunitas ride. But a couple days ago, he said this was it, we were going to be doing the traditional Turkey Day ride, and have tacos at the Pescadero gas station.

I was initially worried that we’d overdressed; base layer, jersey/jacket, heaviest long-finger gloves. Need not have worried! When we met everyone at the base of Old LaHonda, it was 34.5 degrees. Got up to a nice toasty 41 at the top and stayed there, and probably could have been OK even if a bit cooler because, while we’d taken it pretty easy up Old LaHonda, the pace picked up a bit on Haskins. Dropping to 36 in that valley after you pass through Loma Mar, but with Dave & Kevin pushing the pace at the front, we all stayed pretty warm just trying to stay on their wheels. Normally I’d feel bad, sitting back while being pulled entirely by just two people, but I was more concerned about keeping an eye on (younger) Kevin, making sure he was doing OK. 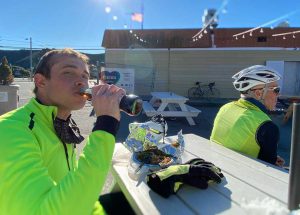 So where do you get food in Pescadero on a holiday? The gas station, of course! It’s a well-known secret they serve great tacos there. Usually I go for fish, but today I went with Carnitas, same as Kevin. Along with a Mexican Coke (real sugar). Make sure you bring cash as they don’t take credit cards. Very tasty sauce. We each had two; I think I would have been better with just one, as I felt more than a bit bogged down for a while. I was hoping they’d kick in by the time we got to Tunitas and maybe, for me, they did.

Stiff headwinds on Stage Road but again, we had others to share the load! Things picked up a bit on the Stage Road bumps; at one point Kevin had to stop to take care of something (don’t recall what) so I dropped back with him and… that was the last we saw of the group until the Bike Hut. By now Kevin (younger Kevin) was beginning to show the effects of the “extra” miles on this ride, but he hung on until Tunitas started tilting steeply upward and… that was that. It was a pretty easy pace (for me, not for Kevin) up Tunitas, and he was making it pretty clear that it’s not one of his favorite climbs (that title goes to West Alpine). I went along with it, but truthfully, when Kevin was flying up the hills not that long ago, I don’t think there really was a climb he didn’t like. It’s not going to be too long before he’s at that point again.
<iframe height=’405′ width=’800′ frameborder=’0′ allowtransparency=’true’ scrolling=’no’ src=’https://www.strava.com/activities/4395158821/embed/b5677c566d311a71b714ed4bb8eb245b4fe6d3cc’></iframe>