I waited… and waited… and waited. I really didn’t want to ride alone, but by 12:30 it was pretty apparent Kevin’s stomach wasn’t going to allow him to ride. Think Greg LeMond’s “bad peach” story. So I finally left the house just past 1pm, chasing the sun.

I would so love to do the regular Pescadero loop again, but a bit late for that, and solo is kind of a tough haul. Nicer to have company when possible, so your mind doesn’t have the opportunity to run through dark stuff (and with Covid-19 running us ragged at the shop, plus the move, plus having just replaced a furnace, then a dishwasher that rats ruined by eating through the water pipes, lots of dark opportunities!). But you do what you have to do, and with just me, it was an opportunity to ride up Old LaHonda a bit faster than has been the case lately, as I’ve had to hold back for Kevin. It’s a lot nicer climbing at 23:20 than 26 or even 30 minutes. You get a chance to blow out the cobwebs and actually get a bit sore from the effort.

Got passed by one guy on the way up while passing quite a few others. Not huge numbers out there, but that was probably the time of day. It was actually pretty nice, staying in the mid-50s to low-60s until I got over the top of the hill. Surprisingly cooler on the ocean side, which is not the norm for winter. Of course, it’s not actually winter yet; just feels like it since we exited “summer” just a few weeks ago. 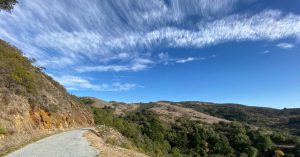 West Old LaHonda as pretty as ever. I stopped for the obligatory photo but it’s kind of silly posting another one here. Not like there haven’t been hundreds of others! Oh heck, here it is anyway. Nearly every Tuesday/Thursday-morning ride seems to have one.

A bit of a headwind going out to the coast; what keeps you going is thinking about the tailwind heading back on the flatter part of Tunitas. I stopped to take photos of the Llamas that reside a few miles west of LaHonda, and watched as a guy who’d apparently been behind me for a bit went riding on. And I’m thinking, chase him down or take it easy? Taking it easy generally isn’t an option for me, but geez, chasing down a guy with fenders and a really monstrous front handlebar bag? Like that should be an effort? But it was. He was pretty strong. No conversation; as soon as I pulled alongside, he put on a mask and disappeared.

Stage Road up to Highway 1 was lonely. It’s a lot more fun when there are others out there in front of you, but not today. Did play cat-and-mouse (or leapfrog) with one guy on Tunitas though, as I stopped twice, once to water the plants, and the second to fiddle with my phone. With a couple of stops I was still in the 55 minute range up Tunitas, faster than the last time, without stops, with Kevin. It’s been a long, a very long time, since I’ve looked forward to him riding stronger than me again! But he’s got to get back in shape. He might be in one of those downward spirals where you don’t feel so great so you ride less strongly (and less often), which causes you to feel even worse, a cycle that can only repeat a few times before you’re wondering what it was like to feel strong like you used to. Hate that. I know it too well, although for me, that spiral can take place in a very short period of time, just a couple weeks. For Kevin, there’s not even a dent in his shape for a good two week, sometimes even longer, of lower activity.