It was the best of times, it was the… oh, wait, I think I’ve used that a few times already. So it was just a weird time, the first time we’ve ever started up a climb, had to go back down and attack it from another direction.

Thursday morning (yeah, way behind again) it was Kevin (not pilot), Collin… and me. Kevin (pilot) has been opting for a ride leaving an hour later, a luxury allowed those who have retired. I’m a very very long way from that, so I still need to work rides in around… work.

Since it was Thursday, it was the Huddart Park connection to Kings. It started nicely enough, and I was feeling pretty OK/not bad/better than expected, despite not sleeping well the night before. Sleep doesn’t seem to have much affect on my riding (but riding definitely helps me feel better on days I didn’t get much sleep, which is odd). The lower gate was open, so nothing to slow us down as we began the climb. I was actually keeping ahead of Kevin & Collin too, despite getting pretty heavily gassed on the short steep pitch. The one were I always get heavily gassed and have never figured out if the best way to recover is to take it really easy on the subsequent brief flat section, or just keep rolling along because thinking I can recover, once my breathing is shot, isn’t realistic. Just push as I can, for as long as I can.

And I kept pushing until… until we got to the entrance station, where we were met by what you see in the photos. They’re finally getting around to fixing the road we might nominate for a Paris Roubaix cobble section. Not sure how long the work will be going, but it’s not that big a job so the plan might have been to have things open for the weekend.

So, back down we go, back to the base of Kings, and back up the usual way. It could have felt really bad, but it didn’t. I still felt pretty lively and managed to put in quite a few strong efforts, basically interval training, and then throttle back and wait for Kevin and Collin to catch up. Below is what one of those intervals looked like. Heart rate begins at 147, kicks up to a max of 167. Power goes from 250 or so up to 430 watts at the start, averaging about 350 for the one minute effort. 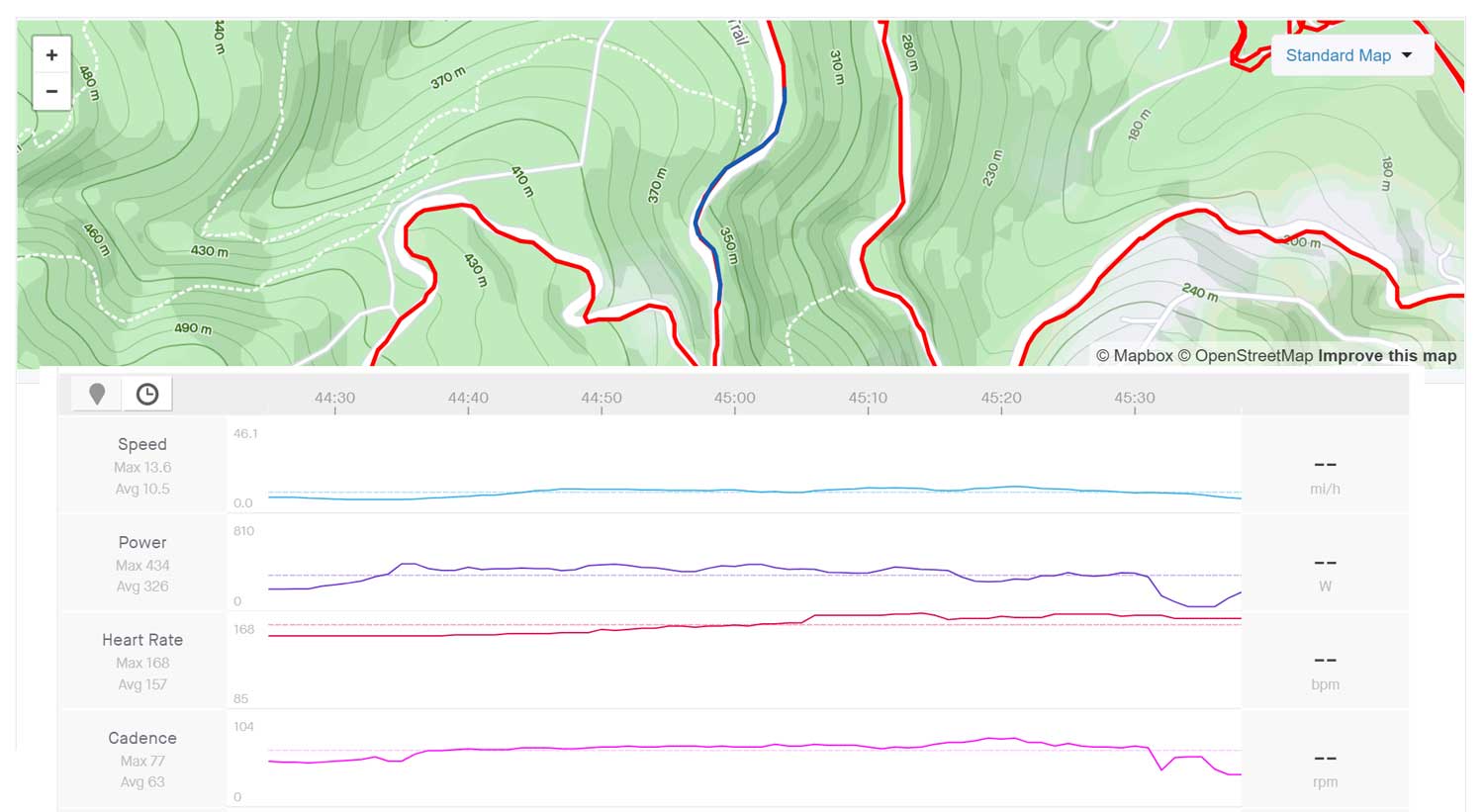 About 3/4 of the way up we spotted someone up ahead, and what the heck, with a rabbit at hand, I did another interval to catch up. Turned out to be a recent transplant from Boulder Colorado. At the top we told her about our regular ride, how it goes rain or shine, and that winters won’t be quite as bad here as in Boulder.

Overall another ride that’s left me wondering what sort of shape I’m actually in. I feel pretty strong at times, but I’ve not had any really long rides this year, nothing over 72 miles I think? This will likely be the first year I haven’t ridden a century since… 1990 maybe? But my weight is stable and my power seems to be OK. I do wish Kevin’s (not the pilot) knee was doing better so I could get in a trip to Santa Cruz and back (113 miles), but just don’t see that happening, especially with the shop move.
<iframe height=’405′ width=’800′ frameborder=’0′ allowtransparency=’true’ scrolling=’no’ src=’https://www.strava.com/activities/4229250646/embed/61558a8ee9b5c7a7e33d7d0d6c04f3ed782e469f’></iframe>