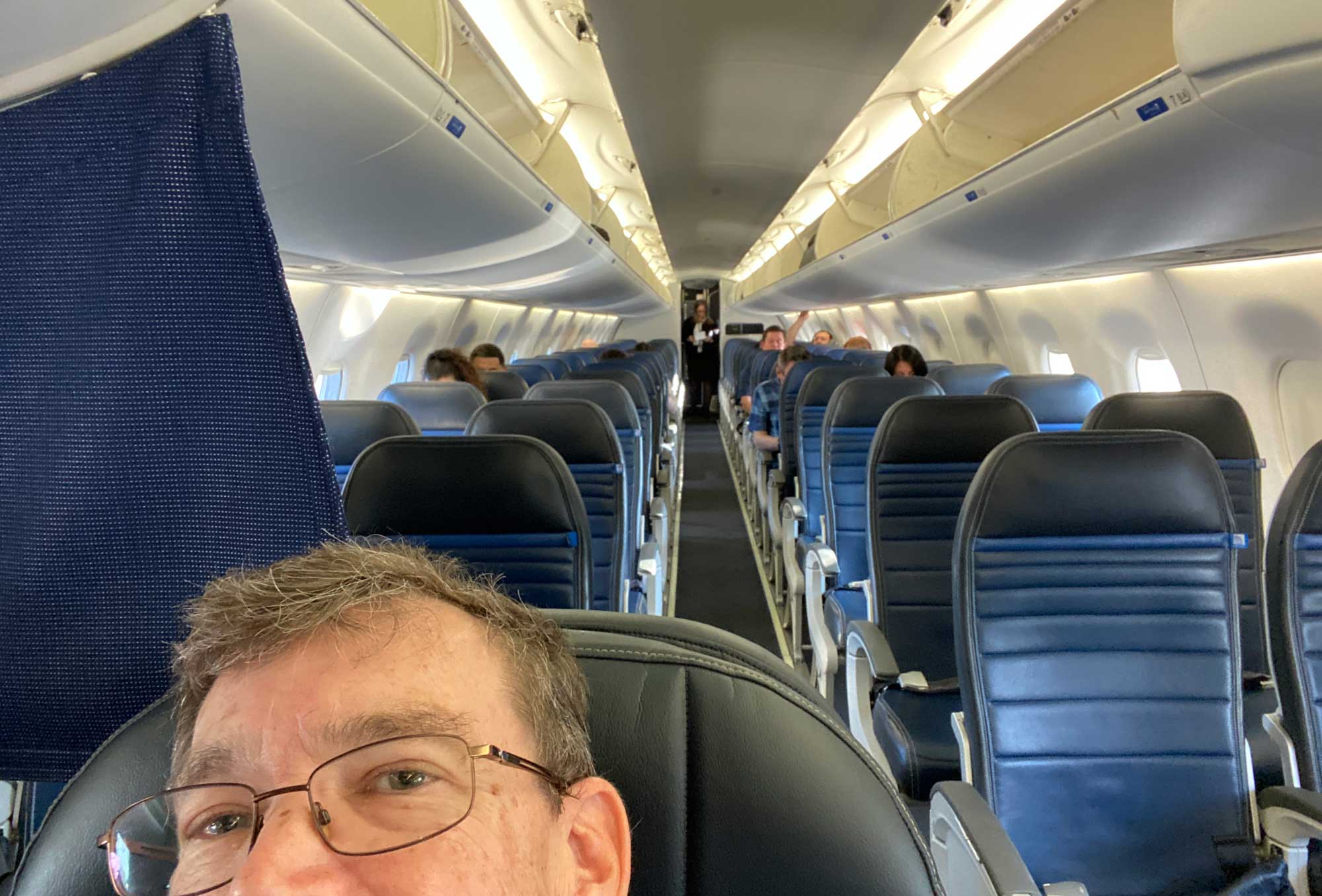 Sunday. Really thought I'd get to ride Sunday. I had to fly to Oklahoma City for a bicycle dealer meeting (yes, Oklahoma), and originally no way to ride before flying, with a 9am flight out of SFO. Chose the early flight because it was a nicer plane (787 instead of a Barbie Jet) and it was a couple hundred dollars cheaper. Good reasons, right? But Saturday night I'm looking things over and notice two things. First, I can do an SDC (same day change) at no charge to the later flight, because I have status on United, and second, well, the 787 was arriving from Taiwan. And I'm thinking, Asia, Corona Virus, would I rather get on a plane that was previously just a short hop away from the center of the Corona Virus, or one that came in from Reno? As an added bonus, the Barbie Jet flight leaves around noon, so I can get in a quick morning ride!

So I wake up at 7am, start to get dressed to ride and my wife says "Did you forget it's daylight saving time today?" Oh. Crap. As it turned out, I could have gotten a ride in because my flight was delayed an hour or so, but even if you knew early enough that it would be an hour late, things can change to leaving on-time without much notice. And in fact things did ping-pong around a bit, at one point my flight being two hours late but in the end just under an hour.

The flight out seemed relatively normal, probably two-thirds full. SFO was definitely quieter than usual though. I was through security in maybe three minutes? And the Oklahoma airport? More on that later.

This was a very quick trip; in one day, out the next. When I checked in at the hotel, I asked the desk what time I needed to hail a ride for a 6:30pm flight. She told me 3:30. That traffic is really heavy that time of day. And I'm thinking, really? There's nothing out here. 21 mile ride from the airport passing through something that looked like the stretch of 80 between Dixon and Sacramento. Yeah, right. When the meeting was over on Monday, I called for a ride at 4:30 and could have done 5pm or later. What passes for "traffic" in Oklahoma is a bit of a joke for someone from the Bay Area.

But the flight back was creepy. I knew things were amiss when I cleared upgrades for First Class on both flights. Not unusual for the flight from Okalahoma City to Houston; that wouldn't be what we'd call an elite-heavy route. But Houston-SFO? That surprised me. That's a very heavily-traveled route by well-off business flyers. But not too many flyers in general that night; both flights were less than 1/3rd full. And there was this feeling that the world was being rolled up behind me.

I would not, right now, get on a plane going anywhere. At least not anywhere that I didn't mind getting stranded for a while. This Corona Virus thing is seeming to get out of hand very quickly. And yesterday the news was all about the National Guard creating a "containment zone" around New Rochelle, and then today we got the US not allowing anyone to enter the US who had been in Europe, cancellation of the NBA season, and finally, Tom Hanks and his wife have the virus. Tom Hanks. Mr. America. The everyman. Today's Jimmy Stewart. I think Tom Hanks coming through this intact will be a very good sign to the country, as corny as that sounds. But if he doesn't? If he became a statistic on the wrong side? It sounds equally absurd, but those feeling a bit frazzled around the edges might lose their grip entirely. Things could get really bad.

Boy do I need to ride tomorrow morning.