Sunday? Yes, I rode Sunday. Solo, since Kevin was out ill with some minor flu variant. Was planning to ride to the coast but the drizzle and wet roads convinced me to do something different. After climbing Old LaHonda, I descended the other side, then rode back up 84 to Skyline, north to Bear Gulch and descended to the dead-end at the fence at the bottom. Climbed back out and did another dead-end road, Native Sons. Back up via the upper part of Tunitas and back home. Not very long (43 miles) but packed a pretty good amount of climbing, considering the distance (5500ft).

Tuesday. Got off to a very late start, arriving at 7:55am, 10 minutes behind scheduled start time. Not surprised nobody was there, and Kevin and I assumed it likely nobody had been there. We later found out that wasn’t the case; Karen and JR had shown up! Weeks of nobody but us and all of a sudden they show on one of those rare days I wasn’t reliable. Very slow ride for us, and cut it short by skipping the West Old LaHonda loop. 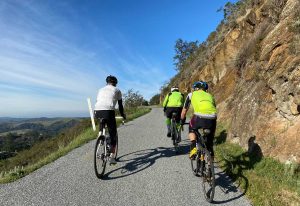 Today. Kevin (pilot), Karen and George showed up! Nobody was feeling fast; nevertheless, someone Kevin (younger) and I moved off the front, steadily adding space between us and the other three. Had enough time to stop and take a photo, as seen above, just past the archery range.

Nice day on West Old LaHonda, with Kevin (younger) spotting a very small snake on the road, which we stopped and dutifully scooted off the road and into the grass. Pretty amazing seeing snakes in February!