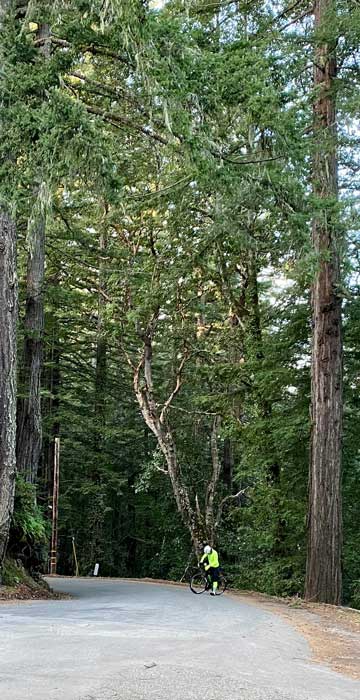 It was Kevin’s first ride in… three weeks? More? I don’t think he even remembers. He didn’t ride when my wife and I were in Israel, then a girlfriend gig, then something else I don’t remember. But finally got him out there this morning, and talk about a cold-turkey reintro to cycling! It was cold… 32 in Woodside. He was having issues with his epilepsy meds creating balance/vision issues on the climb.

And… it was slow. I mean really slow. 40 minutes slow up Kings. How can you even ride that slow? At that speed it seems like everything around you is so much bigger than life, and you’re not making things happen, you’re waiting for them.

That picture, taken at the top of Kings. I wasn’t even thinking about it thematically when I took it, but pulling it up on the phone, enlarging it, filling the screen with just Kevin with tall trees around him… there it was. Small & inconsequential. Once in a while I think it’s OK to feel like that, to be a bit player in a grand scene instead of trying to make a difference.

By the time we got to Sky L’onda we should have already finished the West Old LaHonda loop. We. Were. That. Slow. No chance of riding that section today, especially since Kevin had to stop at the restroom at Alice’s to get rid of a bad peach (an old Greg LeMond reference about a stage in the ‘Tour where he had a pretty bad attack of the runs).

And yet, it was still a really nice ride.