Not sure if we’re 5 or 6 or 7 days into my trip to Israel with my wife, but today was certainly the most moving and affecting day of the trip, and nothing forward could possibly change that. I was expecting the afternoon trip to Bethlehem to have a sort of soul-claiming(?) effect, seeing not just the birthplace of Jesus (in terms of where he was born, like what street or maybe even which house) but the actual spot in the cave. What, not in a barn? No, it was a cave, upon which there is a church built atop of it. Because in Israel, anything important has one, if not two, or three, or even four, churches or temples or mosques built on top. But there was this kind of Charlie Brown’s Christmas thing going on. Too many people, too many lights, too much glitter, in a very odd way too much being made of something that, at its heart, is surprisingly plain and simple. That’s where its strength lies, and waiting in line while people snap photos and selfies in a place that really doesn’t feel spiritually isolated enough from the crazy busy world just outside? I’m sorry, I missed out on something. And to tell you the truth, I didn’t see much of anyone experiencing what I had hoped to. Maybe you can’t, when there’s no time to pause and reflect in a peaceful moment. It’s curious that I gained more knowledge of the power and spirituality of Jesus from a well-versed Jewish tour guide than anything else over my lifetime.

Perhaps the stage was set when, shortly before our arrival, the for-Bethlehem-only tour guide (because our Israeli tour guide isn’t allowed into Palestinian territory) asked if we wanted to go to the gift shop first, or after the birthplace-of-Jesus visit.

Maybe it was because you really couldn’t, shouldn’t, be seeking much beyond the confines of your soul after a visit just a couple hours earlier to the Holocaust Museum. 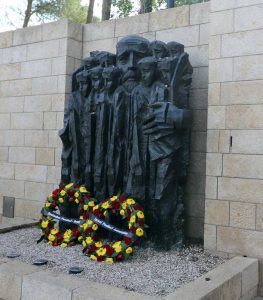 Can I describe why it moved me to tears? Can I figure how it seems to single out some and not others? I think it’s the power of overlapping stories pinned down by the seemingly-limitless strength of evil. You go in knowing the history, the statistics, and get away with believing that’s the story. That’s what allows you to sleep at night. You don’t have to sweat the details, which is what keeps it from being personal, and the personal is the message of this museum. These are people like you, like me, like some of the immigrants trying to make their way to the United States.

And you wouldn’t care so much about the ship that left Europe in 1939 with more than 900 Jews aboard, turned away by Cuba, the US & Canada, if you didn’t know the stories of some of those aboard. Over 250 of them ended up dying at the hands of Nazi Germany.

And the haunting memorial to all the children who never grew up. It’s “just” a dark, round room, with mirrors and thousands of points of light, and a voice in the background, reading the names of the children who died, and their age.

The only time in my life I’ve felt similarly-helpless was the two hours I stood by while doctors worked to stop my son’s first epileptic seizure. For all but the final moments of that two hours, I wondered what allowed me to be so helpless, why would something be presented to me for which I felt no control and thought about my last words with him. There aren’t many “good” scenarios in which you’re thinking such things. But Kevin pulled through. He had a good shot at it because he was born to the right parents at the right time in the right place.

It was too easy for “us” to believe then, that such terrible things were happening in Europe. I say “us” even though it’s very unlikely people responsible for such decisions then are alive now, “us” because it seems, perhaps on a smaller scale, that we’re faced with similar choices today, and making similar decisions. It shocks me to believe that Israel has such a cozy relationship with our current President, a man who in all likelihood would be supporting, in 1939, the policies that kept that ship of Jews from reaching our shores.

125,000 people died here, 228,000 died there, staffing levels and facility size and all manner of other details laid out. And yet some of the most horrifying stories came not from those efficient designed-to-kill inventions from hell, but the many that died in death marches and starved & burned-out ghettos.

What makes the Jerusalem Holocaust Memorial so effective is perhaps it’s way of starting with the known, which you could never deal (and thus could become comfortable) with because it’s such a vast and incomprehensible number (6,000,000), and layering that as a cover for the stories underneath. The unrelenting stories of individuals and families with the same dreams and problems as you & I, until they each meet a destiny that questions your belief in your fellow man.

I get that this entry is all over the map. I haven’t yet sorted out why I was so shaken, so vulnerable. I’m an observer of people; I can’t go anywhere without watching with interest the interactions between people. I saw people searching for context and answers. I saw people who had an interest in history. I saw a very small number of people who looked as they might in any museum, moving from room to room, looking for something that catches their attention, something relevant to them. I could, in most situations, be any one of those people. Instead, I’m the person that comes out that can’t answer my wife for maybe 5 minutes when she asks me what I wrote in the visitor’s book at the end. I just couldn’t talk about it.