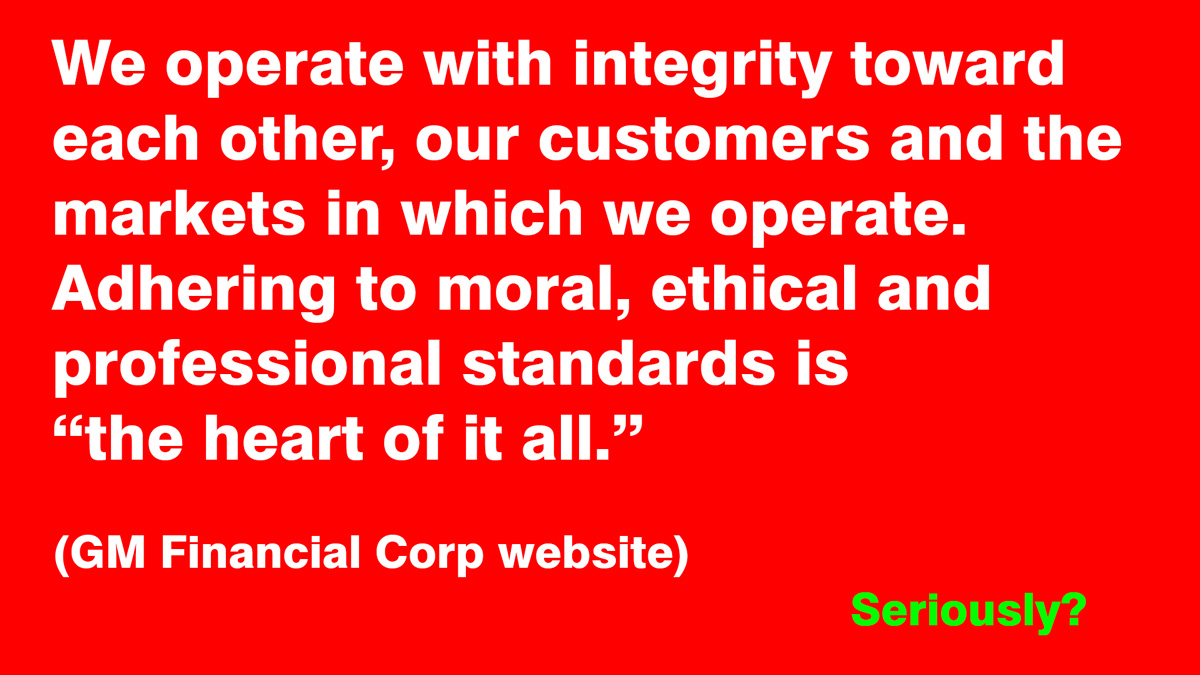 My experience with our (formerly) leased 2016 Chevrolet Volt is the stuff of legends. Bad legends. You can read about the details here, but in a nutshell, we kept sending them money, with my wife writing on each payment that she was extending the lease, and GM financial kept cashing the checks, even though we had not properly notified them, by phone, that we wanted the lease extended. The first and only legit lease extension ended on February 27, 2019.

The first and ONLY phone call ever made to us by GM Financial (or anybody else) was apparently a phone message left on an answering machine. AND THAT WAS IT. The total sum communication between anyone at GM Financial and myself, until June 6th, 2019, when they sent a notice in a normal letter (not registered, nothing scary written on the outside) that we needed to return the car or it would be subject to repossession. That letter was unfortunately not paid attention to; it stated that our lease contract had expired and if the vehicle wasn’t returned to a GM dealer, “We may exercise our rights under the law to repossess the vehicle.”

Which they did. Without anyone at GM Financial wondering why we kept sending them checks, which they dutifully cashed. Checks along with notes asking to please extend the lease. Nobody ever thought to give us a call to say that’s not how it works. Nobody at GM Financial thought anything screwy when they arranged to have the car repossessed. If anyone had bothered to look at our history, they’d wonder what was going on. My guess is that someone did look at the history. They just didn’t care.

But this morning was perhaps the saddest treatment of a customer, or even a person, I’ve come across in a long time. After getting nowhere with Capitol Chevrolet, who insists that what GM Financial does is out of their hands, their social media manager told me to call GM Financial, and gave me a number. I didn’t realize it was the same number I’d called the day after the repossession. The number where someone told me “We don’t have to do that” when I asked if they could send me a copy of the letter they said they’d sent me (which at that point I hadn’t seen).

At 10:36am I got ahold of someone who seemed to grasp the strange nature of what had gone on. She and I discussed the facts of the case, none of which were in dispute (this would change in a later phone call with a different person). It was all about questioning if procedure was followed; if it was really policy that a car would be repossessed when the customer was still paying for it, without bothering to call or email first. After 15 minutes she put me on hold to talk to someone in a different department about it. 6 minutes on hold and my call re-entered the normal queue for a new call. And 10 minutes after that, the phone disconnected.

I called back. Got someone I could barely hear and wasn’t terribly interested in anything. I don’t know if that person intentionally disconnected or if their phone system is just really bad.

I called back again. And this time, I was literally on hold for an hour. They will have phone records to prove it. An hour before I speak to someone who never had any intention of doing anything but tell me that they were within their legal rights to repossess the vehicle. I asked her if that’s how she would like to have been treated, had she made a similar mistake elsewhere. I quoted her GM Financial’s corporate mantra-

We operate with integrity toward
each other, our customers and the
markets in which we operate.
Adhering to moral, ethical and
professional standards is
“the heart of it all.”

She wouldn’t crack. You could tell she was having issues, but she wouldn’t change the corporate response. I asked if she could send this to a supervisor, so she wouldn’t have to deal with being later asked why she couldn’t handle this situation. Get it out of her hands. She wouldn’t budge. It was truly an amazing experience. She told me absolutely, 100%, there was no possiblity of getting the repossession removed from my credit history. It felt like this is what she was paid to do. Her reason to exist. Crush people in a way they don’t bother you any more.

GM Financial and Capitol Chevrolet are going to find themselves greatly bothered in the near future.