Things didn’t go quite as planned today; they went better. It was Sunday, so naturally we’d do the normal Pescadero/Tunitas ride, but, as we rode over the top, it was clear it wasn’t clear. Still a bit of fog along the coast, and we were running light, not even thinking about bringing leg warmers. I mean, it’s summer, right? And after that awful Spring we lived through, who wants to wear leg warmers again? I mean like ever?

The first part of the re-route was easy. Climb West Alpine. Kevin’s favorite ride. From there? Kevin thought we should head north on Skyline and descend Kings. Not hard enough, ugly enough or long enough for me. I figured, if we were going to abandon the planned ride, we had to replace it with something we normally wouldn’t do, something different, something… ugly. Which meant heading the “wrong” direction on Skyline. South to 9, down to Redwood Gulch, and into Los Altos for a late refueling stop.

The climb up West Alpine went unexpectedly well. Really well. Even though I had to double-back and wait 20 seconds when Kevin got held up by car traffic on the flat lead-in, my 43:07 time from Pescadero Road to Skyline was my best in just over 4 years. It’s now pretty much evident I’ve turned back the clock two years, posting climbing times as fast as I was prior to my diagnosis of ET and having to take the bone marrow suppression drugs that drop my hematocrit. The difference I notice lately is that I have little trouble, when the pitch gets steeper, kicking up to 350 watts for a minute or so. I can even see 400 now and then without the expected consequence of feeling like death afterward. I first noticed this a couple weeks ago when I was able to hammer the Hammer of Thor segment on Tunitas. 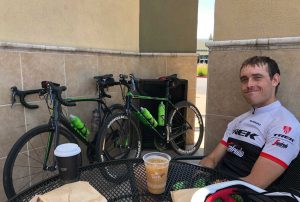 Some of this newfound speed on the climbs may come from the weight I lost when I broke my pelvis. At first I had some concern it wasn’t a healthy weight drop, but I’ve clearly managed to stabilize about 8 pounds lighter than I was before, and dragging 8 pounds less weight uphill makes a big difference.

Descending 9 is interesting but not all that much fun; descending Redwood Gulch even less so! But soon enough we were at the Peets near our former Los Altos location, enjoying coffee and a breakfast cheese & bacon thing for me, a chicken something-or-other for Kevin. Funny thinking, at that point, that the worst of the ride is yet to come, because it’s mostly flat. Fortunately the headwind was pretty light, so not so bad getting home.