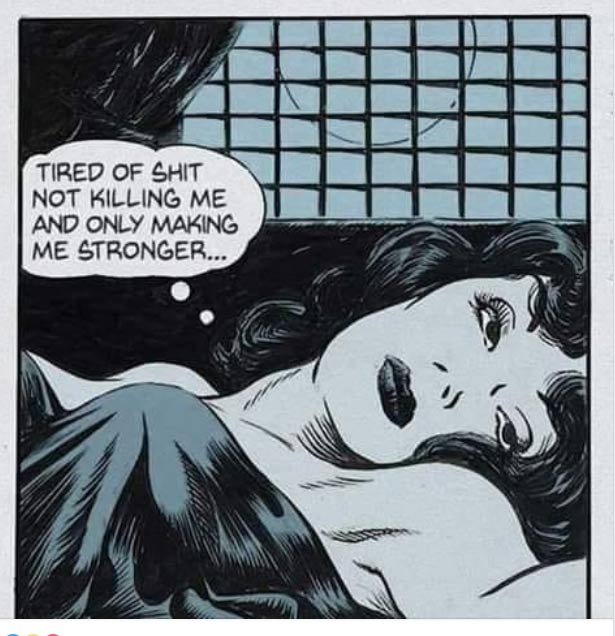 There have been a few times lately when I’ve wondered about that phrase, “That which doesn’t kill us, makes us stronger.” It’s attributred to the great German philosopher, Nietzsche. I’ve pretty much lived my life believing it was true, that there were no limits to its reach. Meaning that, the closer something came to testing my absolute limits, the better version of me that comes through the other side. I’m not so sure of that anymore.

I’ve had my share of tests, as we all have. When I was 12 or so, I got hit, hard, with Osgood Schlatter disease. Daily nasty pain from my knees, something I felt walking, something I felt riding a bike, the sort of pain that stayed with you. First doctor said it was something best dealt with by limiting activity; otherwise I might hobble around for the rest of my life. Didn’t like that so went to another. He said exercise was the best thing for it. Liked that much better. Third doctor said we really don’t know; do whatever you feel comfortable doing and live your life they way you want to. His feeling was that I wouldn’t be able to push things too far because I’d be “pain limited.” We’ll come back to that later. In the meantime, I discovered Star Trek and Mr. Spock’s way of looking at pain. It’s not real; it’s a construct of the mind, and you can will yourself to block it out.

To this day, 50 years later, I don’t know if I actually can block out pain, or if I’m just simply wired incorrectly. I’ve broken a number of bones over the years, and until this last one in February, the broken pelvis, there’d never been any pain associated with them. Until this last one. I never knew pain existed as a real, tangible, impossible-to-ignore thing until I broke both my upper and lower pubic rami. And I’m guessing that I wouldn’t have even felt that pain if not for the fact that your hamstring is attached to the lower pubic rami, making all sorts of tiny, inconsequential movements an experience in IMAX with full surround sound. I finally got to feel what others feel. And I didn’t like it. Where was Mr. Spock’s logic now?

Actually, I’m not giving enough credit to my mild bone marrow cancer, Essential Thrombocythemia, which, at times, can create a dull ache coming from my hip & pelvis bones. It’s a weird thing, feeling pain from the inside-out. But I’ve either blocked that out completely or the meds I take have kept it at bay.

But back to the main event, that nasty pelvic fracture the made pain more real than I’d ever experience previously. More painful even than the time my kids thought it would be fun to try and teach dad how to snowboard. Hmm. Mr. Spock didn’t help me through that one very well either, if I recall correctly, but it mostly went away in a day or two.

But that pelvis fracture was something else. I was off work for three days, unable to move around much. Getting off the bed was an exercise in terror. Once up, not so bad. Objects in motion are best left in motion, I think, because I’d be fine walking (Walking? As if that’s what it could be called trying to figure out how crutches work? Which isn’t as easy as you’d think?) but whether in a chair or on a bed, I lived in terror of my next move. I had no idea how much that was taking out of me, mentally. It’s not all physical. Your mind can easily deal with what it’s dealt with before. Or at least it can recognize and extrapolate forward. For this, I was feeling alone, very alone, with no reference points, and, since this was an entirely new thing for me, my family didn’t know how to deal with it either. They tried, but what can you do for someone who lives for being active, who doesn’t like to rest, who thinks he’ll have plenty of time to sleep when he’s dead? How can they relate to the sudden change where I’m not getting enough sleep because I can’t sleep on my back and any other position would have me trying to muffle a painful gasp? And muffle I did. I didn’t let anyone hear me yell, because I didn’t yell. I wanted to yell. I wanted to scream. I wanted to cry even.

I did get back to work in a few days, but things just didn’t feel right. I couldn’t haul bikes up and down the stairs; I had to be parked permanently downstairs. I was the first person people would engage (because of our store’s layout, the area we diagnose bikes and do minor repairs is the first thing you see), but would have to hand people off.

At that point, I had no idea of the mental roller coaster that would follow. No idea how much my cycling routine kept my mind in a good place. No expectation that this wouldn’t be like most things in my life, with a definable beginning (the crash), middle (gradual improvement) and end (normalcy returned). Because normalcy didn’t return. More to come.

3 thoughts on ““Know what I really miss….. Your web site journals…. Write more :-)” Thanks Walt Hansen for kicking me in the butt.”