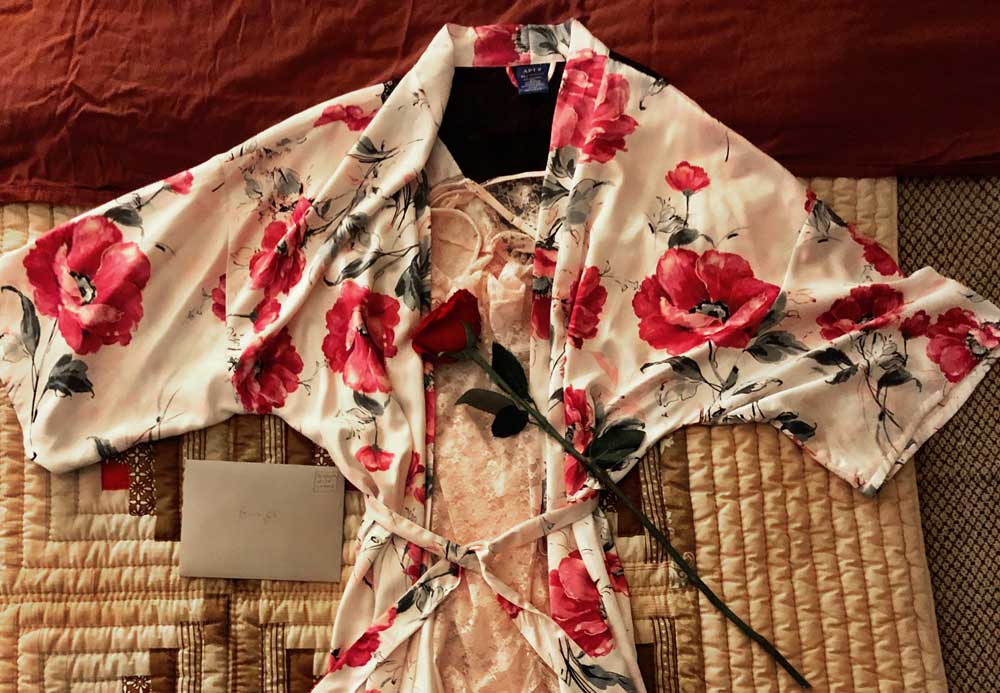 (Originally posted on Facebook)
My wife is beautiful. Drop dead gorgeous. I can’t imagine being with anyone else. She’s not the stereotype though; the ravages of three bouts of breast cancer with medications that interfere with being active have added a few extra “curves” here and there, and the replacement work for what had to be removed from the cancer well, I don’t think that doc does the work for the stars. But that’s not what I see. After nearly 40 years of marriage to this wonderful woman, I see something I still can’t take my eyes off, something that still excites me to the core. But she hasn’t seen herself the way I see her for a very long time. Maybe not since the days (40 years ago) she’d come out of the bathroom wearing a beautiful Kimono and both of us might have been guilty of thinking of the song “Anticipation.”

Yesterday I did something to try and change that. Something that, to me, was kinda risky & scary. Something I’d never done before, and after 40 years, how many things could fit into that category? Not many. But I was thinking about that Kimono, reminiscing about the past, and she’s as sexy today as she was then. So I did some research and found a couple local stores that I could get a Kimono, one that reminded me of the original, and a sheer camisole type thing to wear underneath it. And I cleaned up the bedroom a bit, made the bed, and laid things out, along with a card telling her how I love her even more today than the day we were married. Which is true. And got a single long-stem rose to complete the presentation. Oh, on the envelope for the card, I created a “Forever Wife” stamp. Because she is.

And then I went back to the family room and waited for her to retire. I was on pins & needles. Five minutes later, my wife comes into the family room, wearing the Kimono, telling me she wished she could have held the rose stem in her teeth but the thorns got in the way. She told me nobody had ever done something like that for her. I guess that should come as a bit of a relief, at least for the past 42 years!

She said it was the first time she’s looked in the mirror in several years and thought she was beautiful.

I should have done this long ago. It took a bit of a rough patch recently to shake me up and really let her know my feelings for her, in a way that goes beyond just words. We’re studying a book about the “5 Love Languages (The Secret to Love That Lasts)” and what happens when the two of you are speaking different languages. Finding common ground can be not just difficult but confusing. But last night, I think we were both speaking and understanding the same language. I’m not sure if it’s that she didn’t believe before but now knows, or knew before but now believes. We’ll still have misunderstandings, we’ll still have some rough times ahead, but we’re there for each other, and I remain infatuatingly in love with my wife.