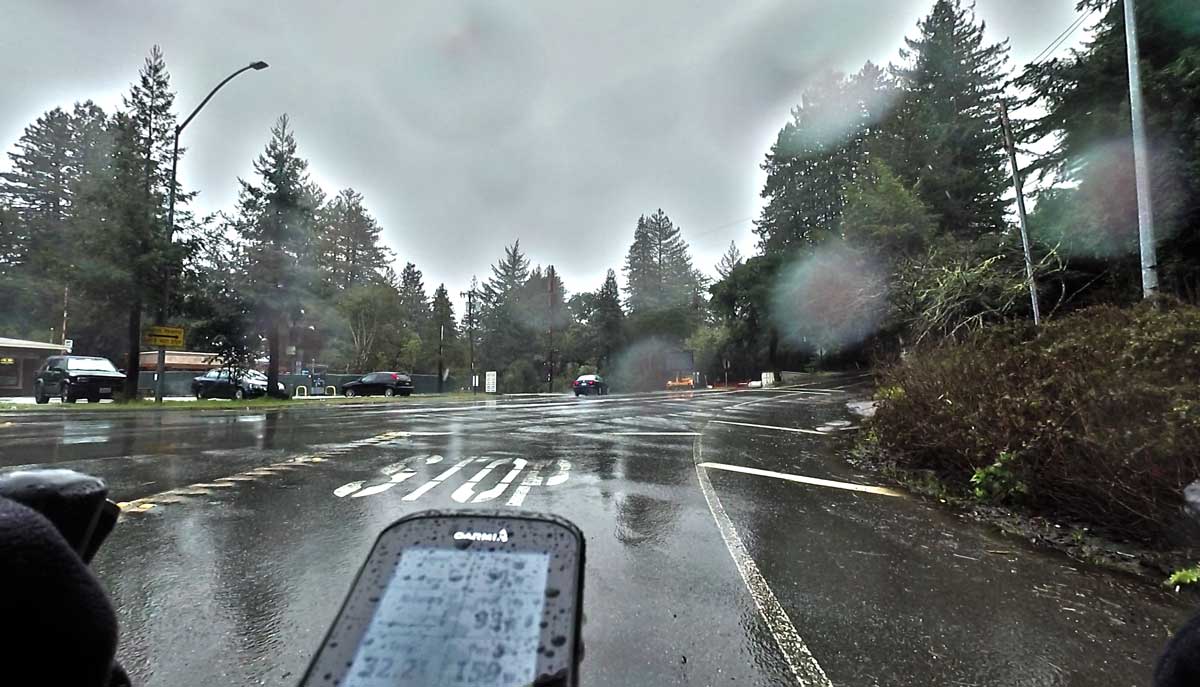 I’m not sure what today was. It depended upon which 90 minute slice of it you were experiencing. When I was riding through Woodside at noon, it was beautiful. Cold, sure, but the light wind had dried out the pavement and the sun was out. Climbing Old LaHonda I watched the temp start to decline, and I figured it was just from the higher elevation. Maybe it was, because by the time I got over to the West Old LaHonda side, it started to warm up again, and the sun was still out.

I spent some time studying the “closed” section of West Old LaHonda, looking for reasons to agree with the county that bikes shouldn’t be allowed through. I found none. The road hasn’t decayed any further in the past couple of weeks, and the “unstable” hillside isn’t so steep that it’s suddenly going to give way and bury somebody. And I have yet to hear from anyone after calling and emailing the county road department.

After dutifully documenting the scene, I rode on, thinking I’d do a variant of the “ugly” ride, heading back up to Skyline and then north, maybe to Kings, or perhaps all the way to 92. That was before the rain started. Hey, it’s just rain. And before the temp dropped to 32. OK, now it’s wet and really cold! And then there’s the inconvenience of hail. Nope, this ride (solo, by the way, as Kevin wasn’t feeling well) was going to be much shorter than planned.

How short? About 26 miles short of my weekly 120 mile goal, and I really don’t want to keep finding reasons to not hit that target. It shouldn’t be that tough. So what to do? Obviously, time to hook up Kevin’s trainer and hit up Zwift Island after dinner. 1 hour 53 minutes later, done! Or so I thought. After uploading to Strava, I found out I couldn’t add. Or subtract. Whatever. 3.2 miles short. So after a brief break, it was back onto the trainer to bang out that last 3.2 miles.

Zwift definitely makes it possible to ride a trainer for an extended period of time. Still, it’s a whole lot easier, for me, to crank up the watts on the road. Not sure why; something to work on. I’m certain that time spent on Zwift, even if the watts are a bit low, is going to help me on the road.

In the meantime, you can check out the photos below, showing the closed section of West Old LaHonda as well as a really scary hillside on 84.