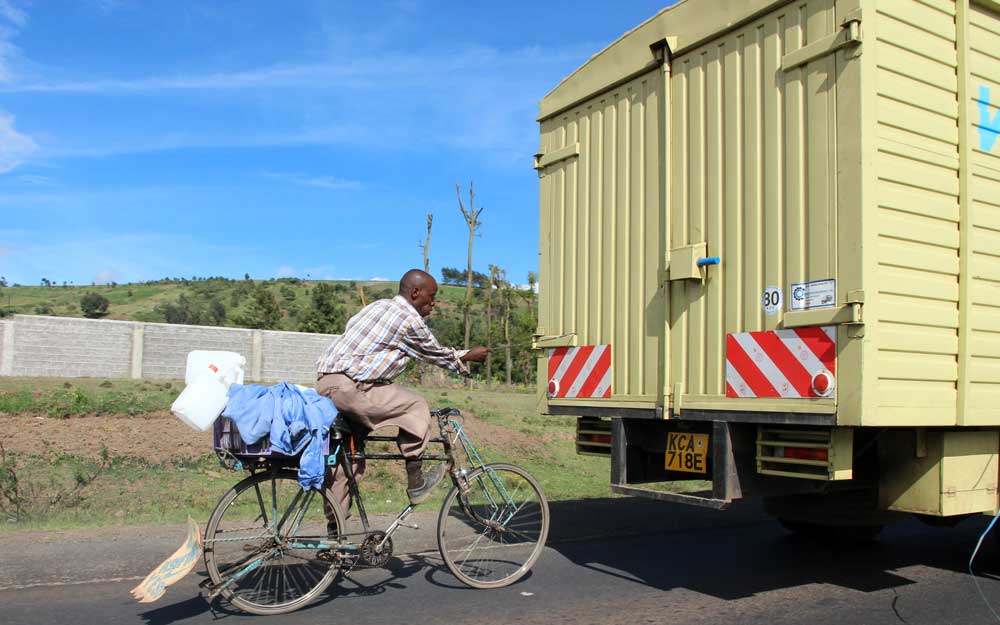 Do I miss riding my bike while on vacation in Africa? Oh yeah. Especially when I see things like this on the highway, since of course that’s exactly how I ride my bike back home. Er, not quite. Using a rope to hook up to the back of a truck on a main highway? Don’t think so. On the other hand, it took a day or two before I noticed many bikes at all around Kenya, probably because cycling in or near Nairobi would be, simply, nuts.

Actually, the roads are so bad here that it makes me question how “real” Chris Froome is. If he really did grow up in Kenya, where the typical road is worse than the Arenberg Forest of Paris Roubiax, why would he be complaining about the inclusion of a bit of pave (cobblestone roads) in the 2015 Tour de France? Seems like it should remind him of home!

So, what’s Kenya like? Not what I expected. First impression was really bad, trying to get from the airport to the place we’re staying (Kikuyu, about 15 miles out of town). The first 8 or so miles took well over an hour. Traffic like you would not believe. Apparently the norm for Nairobi. But once you get out a bit from the city, it’s an amazing place, similar to back-street Thailand but on a bit lower economic scale. All those tiny little corrugated-metal shacks that serve as businesses and sometimes homes, which look so bleak and hopeless when seen on TV… in real-life, it somehow makes sense and all seems to work. This isn’t California, it isn’t Kansas, it isn’t even Thailand. What it is is a vast country with a severely under-utilized people. You get the feeling Kenya could really go places if someone with a strong economic vision for the country could take control. What keeps that from happening? Probably local politics, where you have little accountability and people keep their positions forever. We complain about the quality of our politicians… just imagine what they’d be like if they couldn’t be voted out. Perhaps that’s Kenya.

It would be more understandable if Kenya didn’t seem like a really nice place to live, with weather not unlike the SF Bay Area. The preconception that it was going to be dry and dusty was absurd; Kenya has beautiful mountains, lots of water, and vast areas suitable for farming. But its infrastructure is another thing entirely. 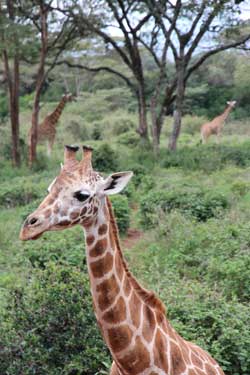 As for what we’ve done here, yesterday we visited the Karen Blixen house (famous from the movie “Out of Africa” and, by the way, Karen Blixen seems to be idolized by the locals for what she did, dispelling the notion that there’s resentment towards westerners), Elephant Orphanage, Safari Walk  and a Giraffe place, the latter of which isn’t worth your time unless you’re really hard up to see Giraffes in a zoo-like setting.

Today was spent at Hell’s Gate, which is kind of like a Grand Canyon shrunk to mini-me size, and pretty impressive. You get to see a fair number of animals on the way in, mostly Zebras, Wart Hogs and their version of deer. After that we visited Lake Navaisha, or more accurately, a small fishing village on the shore of the lake. The lake itself was nearly invisible, hidden by tall reeds which the villagers said were strangling the shoreline and shutting down many of the places people used to launch their fishing boats from. My major revelation was the barbecued Talapia is very tasty!

Tomorrow morning we fly to Tanzania for our 7 day Safari, the main event of this trip.  More soon!