It was going to be a Redwood City/Santa Cruz loop, like we’ve often done, only instead of coming back from Santa Cruz via Highway 9 (Felton-Boulder Creek-Saratoga Gap) the plan was to detour through Scotts Valley and take Mtn Charlie, one of the local Old LaHonda-ish climbs in the Santa Cruz Mtns, and then north on Summit, which becomes Skyline, and home. 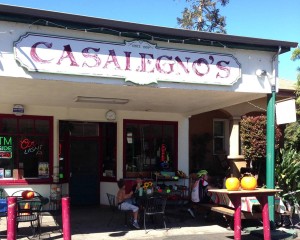 That plan might have worked well had I not had trouble reading the route I’d mapped out on my Garmin, and instead of paralleling Highway 17, we were actually riding alongside Highway 1, ending up in Soquel. Not part of the plan! But a missed turn can become an opportunity, and knowing the area reasonably well, we simply headed up Soquel San Jose Road instead, discovering a very nice little café/convenience store in the middle of nowhere (we’d been alerted to watch for it from a small sign at the side of the road that simply said “Great Coffee, 900ft”).

This ride exemplified my frequent insistence that, just because you feel bad during part of a ride, doesn’t mean you won’t finish feeling great. From the lunch spot in Davenport to the 95 mile point at Saratoga Gap, Kevin was pretty much going through the motions. But everything changed at Saratoga Gap. He flew the rest of the way. Especially on the section we added at the very end, to get to 200k.

About that 200k thing. Around 105 miles into the ride, up on Skyline, Kevin tells me that he’s had a list of cycling things he wanted to do by the time he was 21, and the only one he hasn’t yet crossed off the list was doing a 200k ride. This ride wasn’t planned to be 200k, partly because I had no idea of his desire to do one. But when he told me, I’m thinking OK, his 21st birthday’s only a couple months away, there might not be another chance, and we’re so close! This ride was going to end up being 117 miles.

So once in Woodside, instead of turning heading straight home, we made a loop backward a bit and did a circuit on Mtn Home Road. Perfect distance, as you can see on the Garmin. Finished with 122.2 miles, exactly!